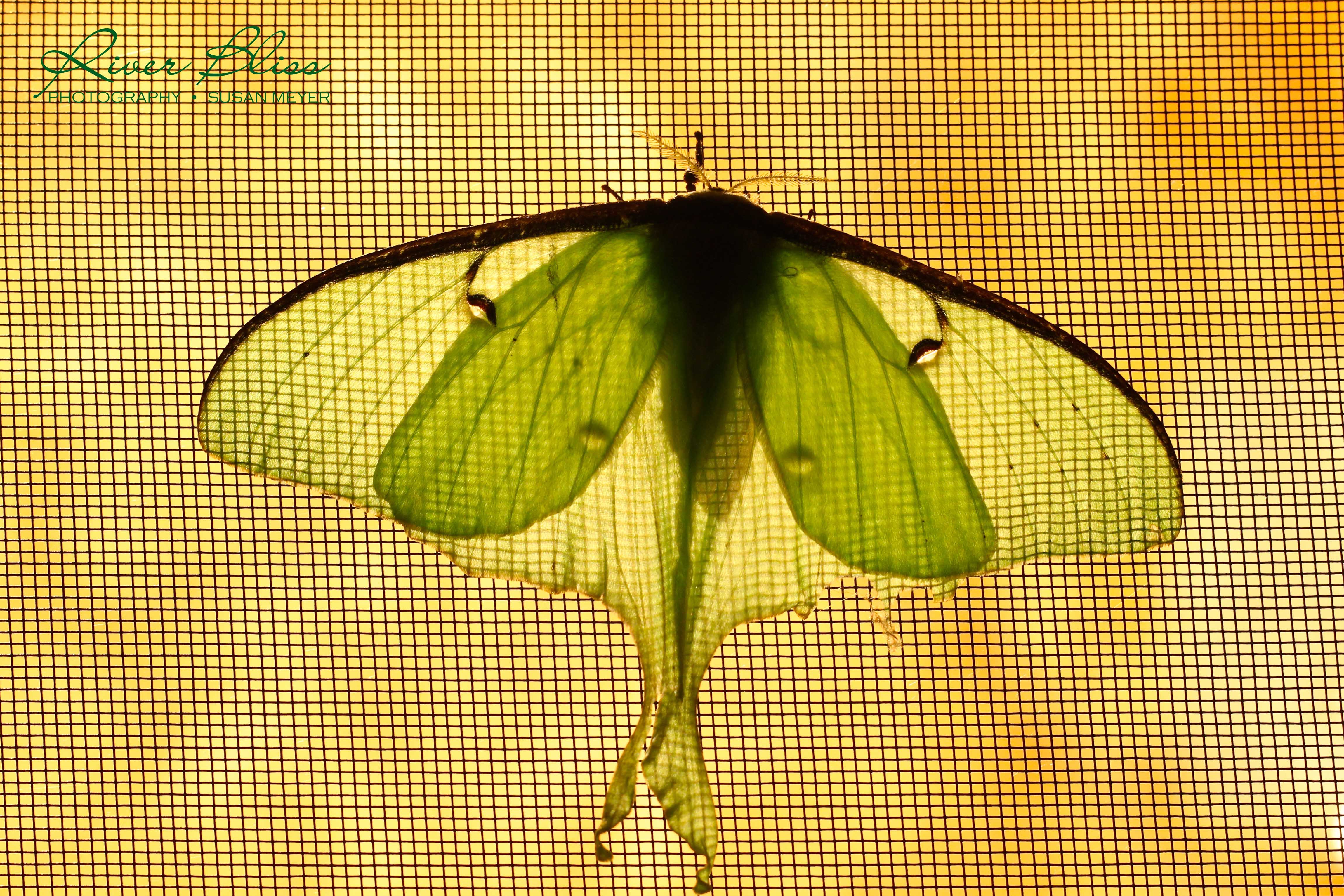 Last night, I  did something I’d never done before: I attended  a group session with a psychic medium. And it was mind-blowing. I hadn’t planned to do it, but it’s interesting how the universe works.

It all began with a visit from a luna moth Sunday night.

I was doing some work on the porch that evening. Before going to bed, I put everything away and proceeded to shut the porch windows. As I approached the last window, I noticed a lovely, emerald-toned luna moth about five inches wide, with elegant, feathery antennae, suspended on the screen. She seemed to be looking at me, waiting for me to notice. I gasped with amazement. 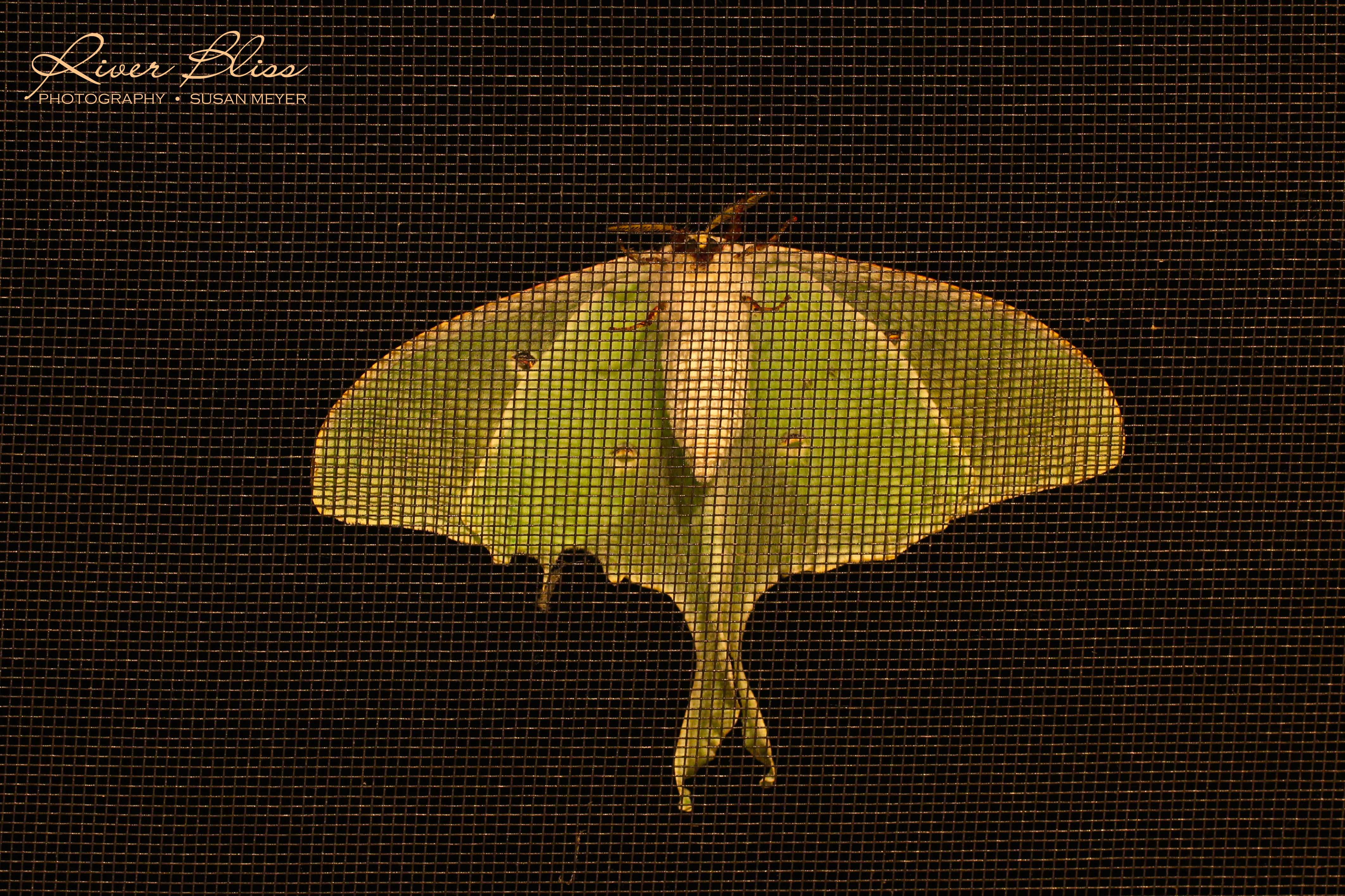 I’d never seen a luna moth before and had wanted to ever since reading Eric Carle’s picture book, The Very Quiet Cricket, to my children when they were young. Even though I was quite tired, I took out my gear and spent the next 45 minutes photographing the luna moth from inside and outside the porch.

It felt like a very special visit, and before I turned out the lights, I pressed my hands together in a prayerful gesture, bowed to the luna moth, and thanked her for visiting.

Then I did something I never do, not knowing why: I woke up Jack to tell him there was a luna moth on the porch window. It was action driven by pure intuition. And then he did something he doesn’t normally do: Instead of grouching at me for disturbing his sleep, he sat up and, in an interested tone of voice asked, “Really?” I was surprised that he wanted to see the luna moth. Unbeknownst to me, before he fell asleep, he saw a picture of one online and thought strongly about how much he wants to see one because he never had before. He fell asleep with the picture of the luna moth on his phone and thoughts of it in his head. In addition, he had an experience during the day that brought to mind someone named Luna. So when he saw the luna moth on the porch – right next to the table where he does his spiritual reading and writing every morning – it was very powerful and significant for him. The next day, after he explained the significance to me, I summed it up by saying that what we are seeking is also seeking us.

I went to work in the morning, and a woman who was a substitute teacher in the building had some free time and was sent to my classroom to help out. After the children went to lunch, we talked for a while. We’d conversed once earlier in the year when she was helping in my classroom. I sensed we were on a similar wavelength and told her I had a story to share with her that I thought she’d understand. So I told her about the luna moth on the window screen, and she got the significance of it. The conversation deepened, and she asked me if I’d ever been to a psychic medium. She planned to attend a session later in the week and thought I might be interested in going and wrote down the information. The way she spoke of him gave me a good feeling. Even though it was an incredibly busy week with report cards due, my intuition nudged me to go.

So I did, along with my adult daughter, an open mind, and no expectations. When the psychic medium, Adam, entered the freshly smudged room filled with the earthy fragrance of sage, I felt immediately drawn to his gentle, loving, joyful energy. No ego! As he explained the process to us before beginning, the electricity went out – something which apparently hadn’t happened there before! It’s often said that disembodied spirits are able to manipulate electricity, and I felt the presence of spirits was strong.

The session lasted for two and a half hours, and there were probably 20 women (interestingly, no men) in attendance. An hour and a half into it, nobody had “come through” for me, and we took a brief break. I went to the deserted second floor to use the bathroom and whispered, “Come on, Mom! Where are you?” In my mind, I heard her say, “I’m here! I’m just waiting my turn.” And that would be so like her – to stand back graciously and allow others to go first. She was never one to push her way to the front.

When the session resumed, Adam led us through a meditation to help us connect with loved ones who have passed on. My grandmother came through first, followed by my mom. (They were the same two who came to my daughter, seated next to me.) I asked each of them a question and received an answer. Then Adam went back to connecting with the spirits who were gathered to communicate through him. At one point, I heard my mom’s voice inside my head say, “I’m next!” and my heart began to pound. Then Adam said my sister’s name and mentioned a young boy with a musical connection. He said “she” (the spirit) was with him a lot. He said he saw an acoustic guitar, and I knew it was my mom coming through, so I spoke up.

For the next 10-15 minutes, so much information came through to my daughter and me from my mom and my grandmother! It seemed like my grandmother was there but letting my mom do the talking – which was often the case during their earthly existence. I am not going to relate specific information, but the content that came through via images, words, and the “language” of intuition was astonishingly accurate and meaningful. (I hadn’t provided any personal information beforehand other than my first name when I signed in.)

Adam described features of a landscape I had been to recently and said that my mom had been there with me. He quoted – word for word – something my son had said to me three days prior about the ways in which my mom and I are alike and different. He knew my mom died of cancer and said she’d had it for two years then immediately corrected himself because he saw her bring her hands closer together in a “shortening” gesture and said she had it for two years but only knew about it for a few months. He referenced that I make “good bread” (which is true) and said that she (or my grandmother?) is with me when I make bread.

In addition to seeing an acoustic guitar, he saw an airplane and a theater stage. If I could illustrate my mom’s life in three symbols, those would be the ones I’d choose. She was passionate about learning to play guitar during the final years of her life, had a career as a flight attendant early in life, and enjoyed a long career working at a performing arts center for 35 years, until retiring only a few years before she died. She and my dad met when they both worked for the airlines and always loved to travel. For her funeral services, the three objects on the altar (as per her instructions) were her guitar, her flight attendant hat, and an autographed baton given to her by her favorite conductor. 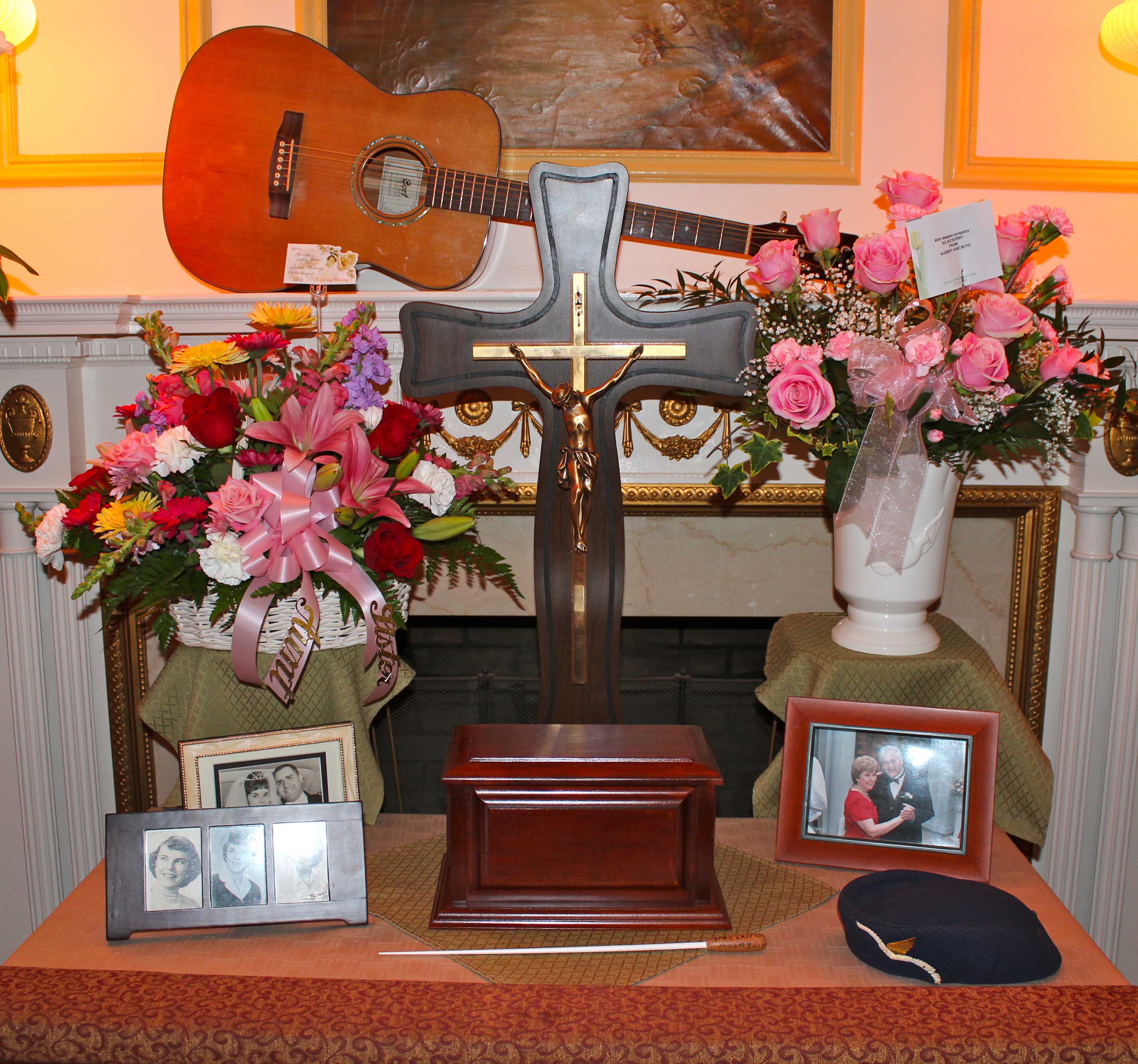 Adam explained that my mom is still very strong around me because I talk to her frequently, and she wanted me to know that I need not worry about these conversations keeping her earthbound because it’s perfectly healthy and fine, and she has free will to come and go. That really spoke to me because when I have my conversations with her – out loud if I’m alone or inside my head if I’m not – I often tell her that I don’t want to pull her back here. I worry that missing her so much or trying to communicate with her will prevent her from moving on to where she needs to be. So this seemed to be a direct response from her to my very sincere concerns about that. Adam didn’t say this to anyone else in the room.

The experience leaves me convinced that Adam truly was in touch with a dimension in which our deceased loved ones continue to exist. I could write many more paragraphs about the content that came through – meaningful and relevant content, including specific messages to my daughter and me and details about us that very few people are aware of. However, it would be difficult to truly understand the potency of it without experiencing the energy in the room. That is something I can’t convey verbally. I’ve continued to process the experience for the past 24 hours, making connections and remembering more details. One connection I didn’t make until this morning was that right when the energy was shifting from someone else to my daughter and me, Adam saw the image of a butterfly and said that when certain animals are around you, the spirit of your loved one is with you.

The same luna moth that led me to Adam’s group session in the first place, when I followed my intuition and shared the encounter with someone I barely knew.

© Susan Meyer and River Bliss Photography, 2015. Unauthorized use and/or duplication of this material, including all text and photos, without express and written permission from this website’s author/owner is strictly prohibited. Excerpts and links may be used, provided that full and clear credit is given to Susan Meyer and River Bliss Photography (susantarameyer.com) with appropriate and specific direction to the original content.