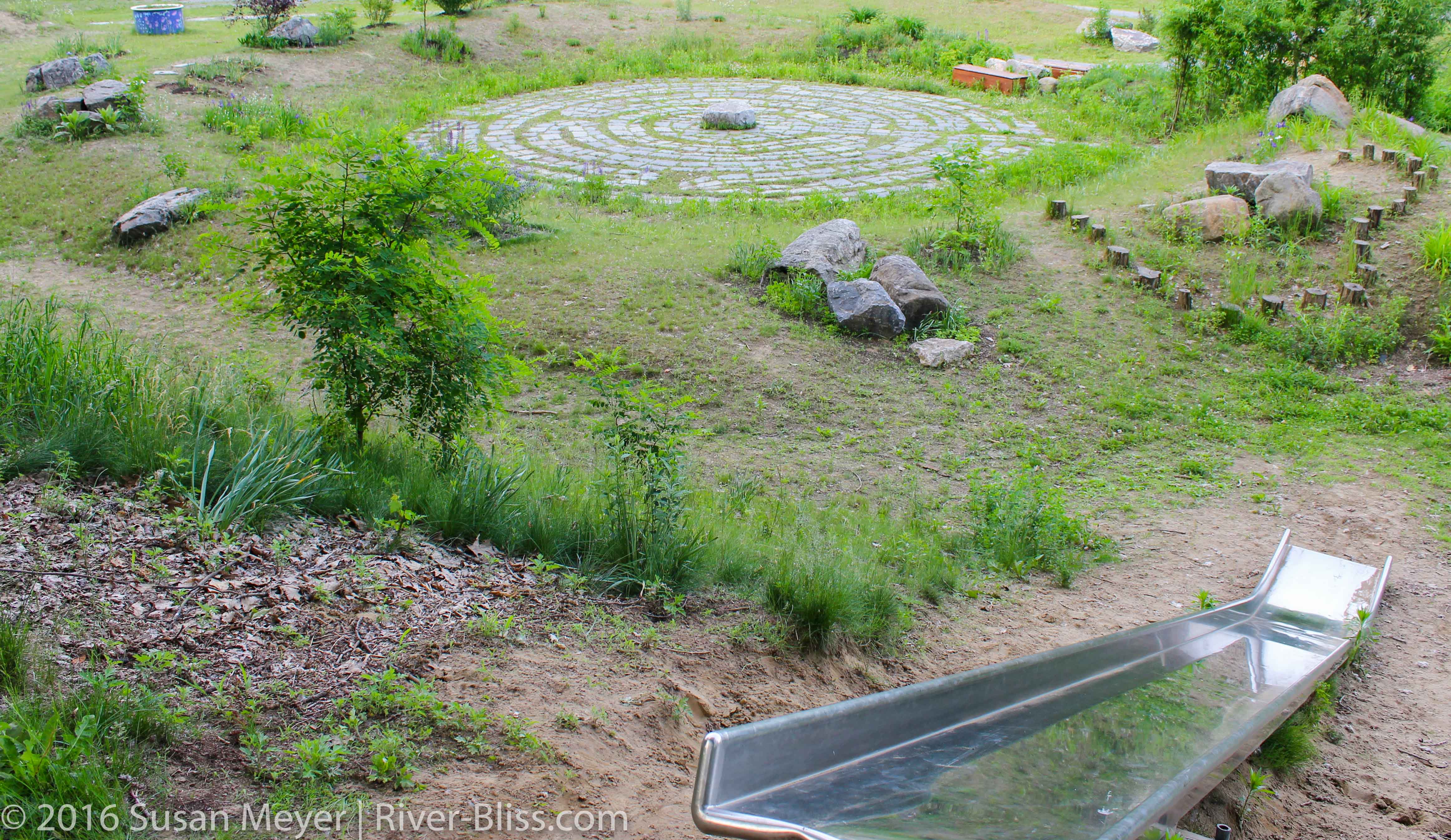 One sunny afternoon last week, while walking the labyrinth in a nearby park, my walking meditation was interrupted by two boys on bicycles at the top of an adjacent hill, between two slides. My guess is that they were about nine years old. After some consideration of the bumps they might encounter on the way down, they decided it was a good idea to ride their bikes down the grassy hill (with a large bump midway down) and through the labyrinth. Although I prefer uninterrupted solitude when I’m walking the labyrinth, I enjoyed overhearing their conversation.

Clearly, the first (presumably older) boy was thrilled during and after the daredevil mission. The second, more cautious boy seemed to enjoy it, too, and after he came to a stop on the other side of the labyrinth, exclaimed, “Boy, that activated my nerve!” – which I found amusing. His words were so honest and sweet.

The boys enjoyed riding down the bumpy hill so much that they decided to do it again. After their second trip down the hill, the first boy called out, “Isn’t it fun?!!”

The second boy responded, “Yeah, it’s fun, but isn’t it terrifying at the top?”

Their energy was entertaining. But even more than that, I found it inspiring! There they were at the top of the hill, curious and scared. When I overheard their initial conversation about whether or not to go through with the feat, I felt a little nervous about how it would turn out and hoped the outcome wouldn’t be unfortunate. After all, there was no path down the hill, which would soon be covered with daffodil blooms. (Poor daffodils!) At least the boys were wearing helmets…

But they went ahead with it, and they did fine. They looked jubilant, presumably because they took the risk and conquered their fears. It was inspiring to witness. And I wondered: When do we stop taking risks, give in to fear, and refuse to step off the well established path to follow our curiosity into unpaved territory – and miss out on the wild and empowering ride? The thrill of it.

After their third time down the hill (and through my labyrinth walking meditation), their parents returned. I realized I had passed this small group of parents on the trail about 20 minutes earlier and was drawn to their vibe. They allowed the boys the freedom to be out of their sight and to explore on their own. To bring their experience and knowledge to a new situation, weigh the benefits and risks, make a decision (intelligently, not impulsively), and gain confidence and/or wisdom. Obviously, the parents had enough faith to allow the boys to explore rather than remain at their side, afraid of them making mistakes and getting hurt.

Earlier that same afternoon, my son passed his road test. Like the boys on bikes, he, too, was thrilled. Since my son is 18, his driver’s license is not restricted, which means he can drive after 9pm. So I asked him, “Is this the chapter in which I won’t be able to sleep at night when you’re not home?”

He replied, “No. This is when you must learn how to sleep at night despite your son being out doing all kinds of fun stuff.”

It wasn’t until several hours after watching the boys ride bicycles down the hill with exhilarated expressions on their faces that it occurred to me how perfect it was to witness that on the same day my son got his driver’s license. It was also the day when I had a major breakthrough during seated meditation. The breakthrough was something I had been hoping for for a long time, and it left me feeling that I would now be able to push through a barrier that had been blocking me for as long as I could remember. That feeling filled me with an expansive sense of freedom. Only moments after I finished meditating, my son called me to announce he had passed his road test. It felt like we both graduated to levels of greater freedom simultaneously, along with the brand new grass that covered the trail with a noticeable carpet of green and the tiny, emerald tree buds that decided it’s time to burst forth. And the boys on bikes.

Before the boys came along on their bikes, I had been walking the labyrinth thinking about how there are times to focus on a certain thing, times to expand your vision and notice what else is around you, and times to focus inward and pay attention to your footsteps touching the earth without getting distracted by outer influences. I would add that there are times to allow whatever arises during meditation without resisting it and to learn what you can from it – in this case, boys on bikes with exhilarated smiles shooting straight through the labyrinth, modeling a sense of excitement and adventure that is downright inspiring.

Note: The featured image for this post was captured nearly three years ago, in early June. Our grass is not that tall at the end of March!