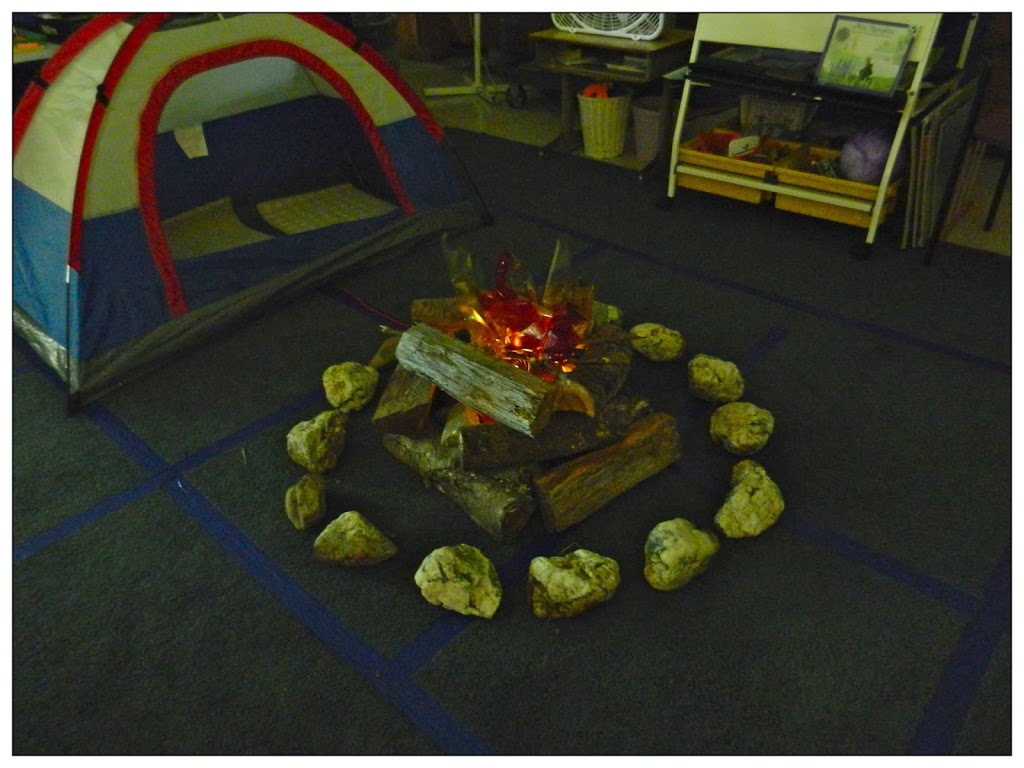 My friend, Chandi, is doing a link-up on her wonderful holistic education blog, Inside Out, and asked me to link up a summer activity. The first thing that came to mind is something I’ve done at the end of the school year three years in a row: a Camp-In Day, or faux indoor campfire. It’s awesome – and worth a post of its own! It’s a great activity to do if you work with kids or have kids at home and would like something new and fun to do on a rainy day. The idea is inspired by my son’s fifth grade teacher who ran a summer camp and treated his students to a modified camp experience for the final week or two of the school year. It’s all about atmosphere and imagination!

I transformed my large carpet space into a campground, complete with a small tent that the children took turns using. This is what the completed setup looks like (with enough light for a proper picture): 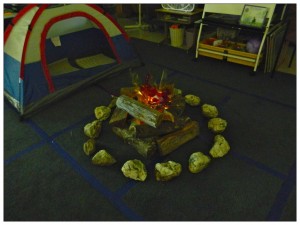 Here are the steps I took to assemble the faux campfire:

Here is a closer view that shows more detail: 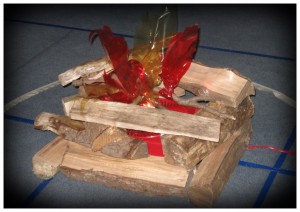 With the lights off, shades down, and the fan turned on low, it looked so real! 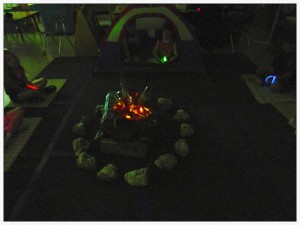 I also sprayed a touch of woodsy-scented room spray and played a CD of cricket sounds. The room spray I used was “Marshmallow Fireside” by Slatkin & Co. (from Bath and Body Works). It was a rather dense, heavy fragrance, and a little went a long way. Lanterns lit dimly with LCD tea lights would have been another nice touch.

I gave the children glow sticks to play with, and we listened to stories on CD. They especially enjoyed Bill Harley’s stories, “The Eeny Weeny Beeny Ghost” (which they asked to hear again) and “Mrs. Lunchroom Lady.” We played circle games like “telephone,” and  children took turns telling their own stories or jokes around the “fire.” My husband, who is a professional musician, came in with his guitar and sang songs with us. Any adult or child who entered our room wanted to stay! 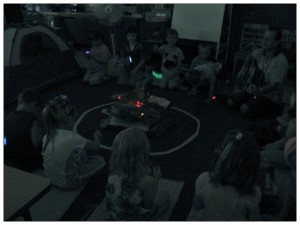 Another idea is to play a video on the SMART Board (via YouTube) of a fireworks display or a camping-themed storybook being read aloud.

I put carpet squares around the faux campfire so each child had a designated space. (They pretended they were sitting on top of a sleeping bag.) The first couple years, I didn’t think to make a ring of rocks and instead put down a circle of tape around the campfire as a boundary. Rule number one was that no part of their bodies was allowed to go past the tape. They ate their morning snack around the faux fire, and during play time, we kept the lights off, only raised the shades a crack, and children were invited to play with Lite-Brite or flashlights, which gave off a realistic campground glow. Some children made hand shadows on a wall. It was dark in our room all day long.

For a special camp-themed afternoon snack, we made s’mores using a pizza box solar cooker that I set up just outside of our classroom. But first, I talked about the science behind it and how the pizza box oven would trap the heat from the sun to melt the chocolate and marshmallows. The chocolate melted more quickly than the marshmallows, but it all worked out just fine. However, we did need to do this on a sunny day! 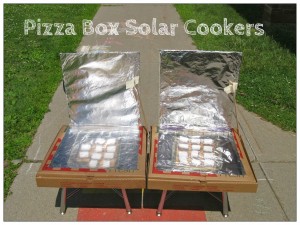 Our Camp-In Day is always great, relaxed fun. The children’s energy is appropriately mellow, and many of them tell me it’s their favorite day of the entire school year!