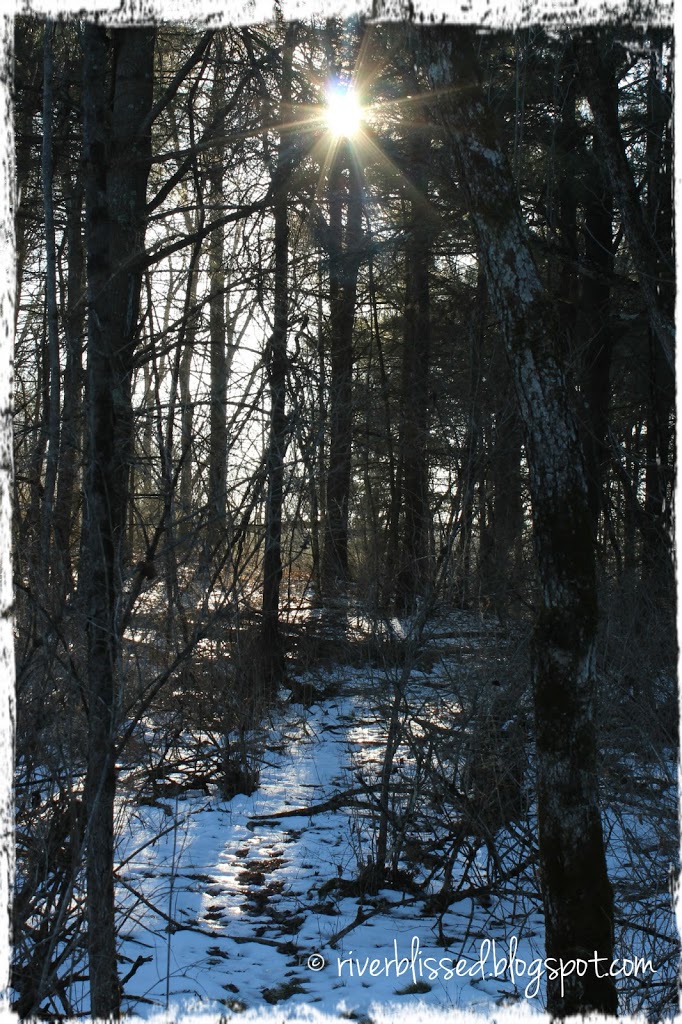 Lost in the Woods

Yesterday I took a walk in the woods, and it turned into a teaching tale relevant to these uncertain times and questions I ponder on a daily basis.

To begin with, I had to turn around after a few minutes because the shallow snow was crusty, hard, and slippery. I realized that I needed to better equip myself before going any further, especially since there were many hills and lots of uneven terrain to navigate. I returned to the house to get some ski poles (thinking that’s the best I could do), but my husband provided me with some crampons and a walking stick instead, which were far more effective.

Properly equipped, I returned to the forest.

After climbing a steep hill, there is an area on the trail in which the sun beckons brightly, drawing me toward it. 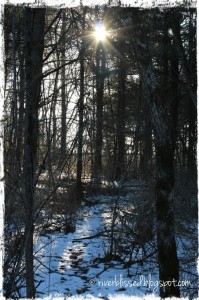 Sunlight illuminates the path, and I can’t resist walking in the direction of the light. I love that part of the trail. It makes me think of the importance of following our highest light as we navigate our life’s journey. 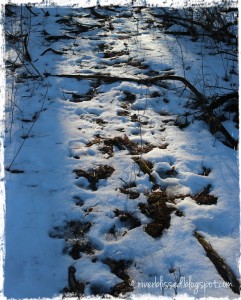 A little further along the path, there is a chair, which gives the feeling of a presence of some sort. It feels like a gatekeeper. 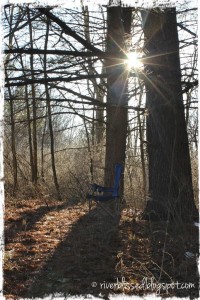 Almost immediately after passing this point, I lost the trail. I walked for a couple minutes on what I thought was a trail, but it turned out to be a dead end. Although I had lost the path, I still had my bearings and knew which direction the road was, and the stream. These were the perimeters of the forest. I knew which direction not to go and which direction I needed to travel; the problem was, I had run into obstacles in the form of heavy brush. And I was not in the mood to bushwhack (which in this case felt like forcing my agenda on the forest).

I became frustrated and perturbed that the trail wasn’t more clearly marked. I even called my husband and told him exactly what I thought of his trail maintenance. He tried to describe the way to me, but what he said didn’t make any sense. I kept turning around and going down different paths that resulted in dead ends, again and again. I still knew where I was in relation to the important markers and perimeters and had a clear sense of which directions were completely off course and must be avoided. I could see where I wanted to be but couldn’t figure out how to get there.

Then I recalled a few lines from one of my favorite poems, “Lost” by David Wagoner:

Stand still. The forest knows where you are. You must let it find you.

So I chilled. I became quiet and calm and entered the stillness, the soul of the forest. Almost instantly, the swaying pines started calling to me, making a whispering, rustling sound that they probably had been making all along, but that I couldn’t hear when I was so focused on the rantings of my small self that insists on separating itself from all else.

And then – just like that – I knew the way. It was an intuitive knowing. I found my way downhill to the tall, swaying trees with ease. From the start, it had been my intention to photograph this area. 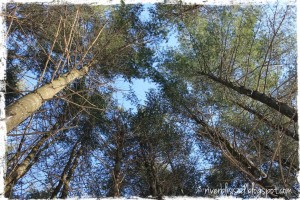 There was a heart in the negative space where the treetops came together.

After putting away my camera, I began walking and once again could not find the trail. It was nowhere to be seen. I had missed the markers and even forgotten to look for them.

I became still and receptive again and noticed some animal tracks, filled with certainty that they would lead me back home even though I saw no signs of humans having traveled this way. I followed them, and they did. 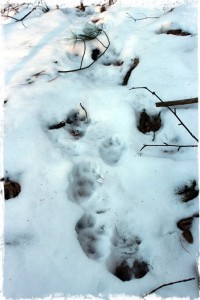 While following the tracks, I didn’t know what kind of animal left them, although I felt it was one that could be vicious. When I got home and flipped through a track identification book with my husband, the fisher tracks caught my eye, and later a wilderness expert helped me to positively identify them as such. I was curious about the symbolism of the fisher, did a little research, and learned that the fisher is portrayed as a brave hero in Woodland (Native American) Indian legends.

The moment I stepped out of the forest, I realized that I had left my walking stick in the area of the tall pines. I had promised my husband that I wouldn’t leave it in the woods, so I felt I needed to go back and make good on that promise. I called him on his cell phone, and he was in the woods looking for me. We met under the tall pines and found the walking stick. He pointed out the markers and explained that he made the trails to be confusing on purpose. Having had this experience, I’m quite certain that next time I won’t get so lost in this area.

This morning, I was involved in a conversation about how challenging it is to raise teenagers in this day and age and how neither I nor the other person claims to have the answers. It could have been a conversation about the teaching profession and the crisis in our public schools or any number of social or personal issues with which we grapple. And then I thought of my experience in the woods, which became a powerful metaphor. (Actually, just as in dreams, there are lots of metaphors contained within the experience!)

Getting frustrated because the trail isn’t well marked.  (But it was designed that way on purpose!)

Following the way of the brave hero.

There’s also the idea of being properly equipped (with knowledge). When we come to the limits of our knowledge, that’s where intuition takes over. And I think that the integration of knowledge, experience, and intuition gives birth to wisdom.

I think we need to realize that we can’t find answers by sticking to “the shoulds” or believing there’s one single path (i.e. conventional wisdom, the way we were raised, scientific research, the “experts,” religion). But if we can become still and present in the moment – and be receptive and aware – we’ll know what to do. The answers will come; they seek us even as we seek them. It might mean taking a completely different route. But intuitively, we find our way.

I believe that such guidance is abundant and readily available to us if we become receptive to it – if we tune in to that channel. However, it does not come to us when we are in an egoic, reactive state because we are shutting it out. It’s a matter of tuning the dial of our awareness.

Though it may be tempting to take the shortcut and do what others tell or expect us to do, life becomes so much richer when we open ourselves to the peace and possibilities of the present moment, where new ideas are born. If we are willing to live an authentic, creative, courageous life, we discover that there ultimately are no clear cut answers, no one true way. However, we can keep our bearings with love as our compass.

These are confusing times, and the answers may be unclear when we remain inside our chattering minds and think too much about the obstacles in our way. But perhaps there is some peace in knowing that I’m here in the woods with you. You are not alone.