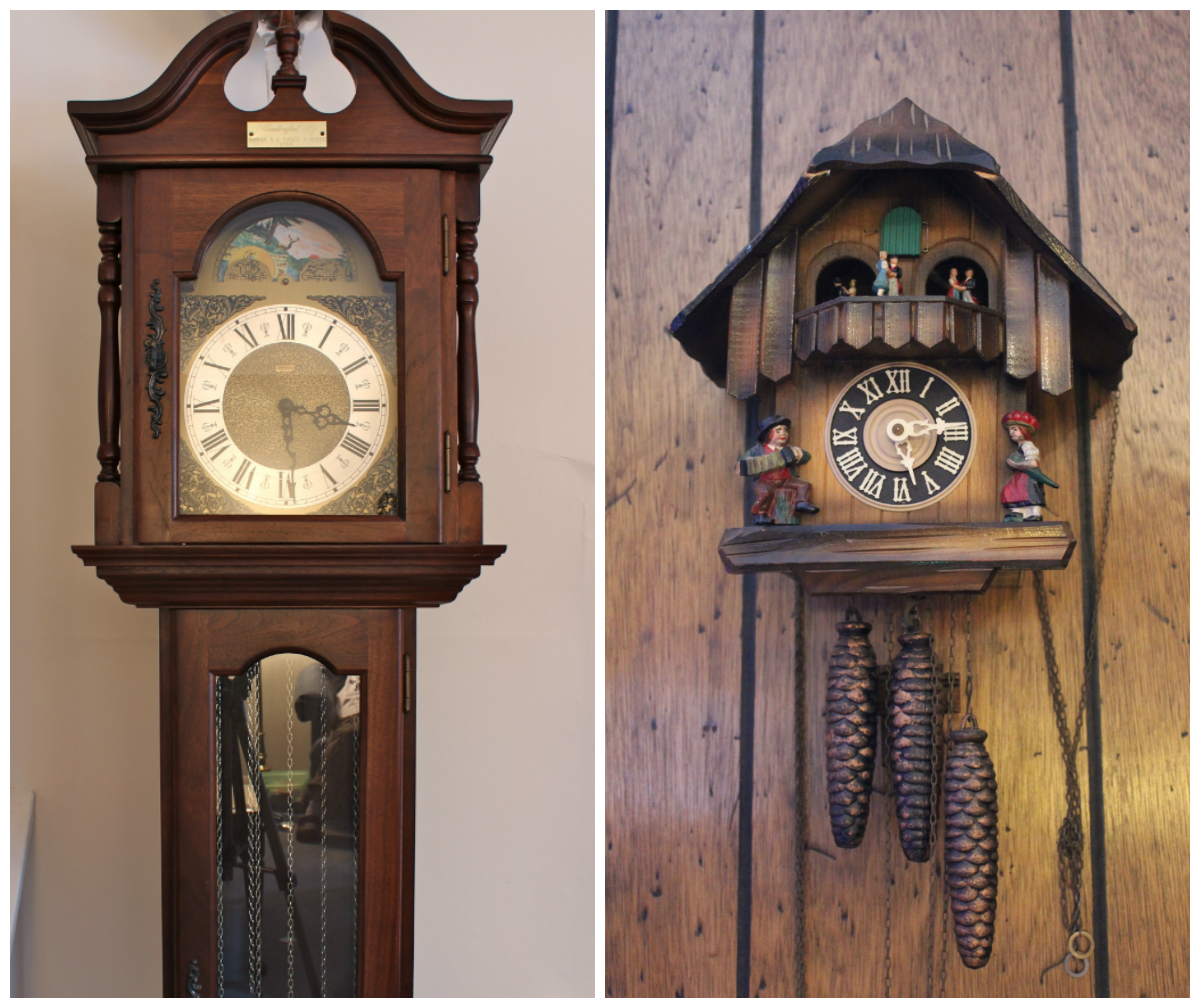 There have been some mighty strange goings-on in my world since my dad died three weeks ago. This post is just in time for Halloween, although the timing was not at all intentional. I’m sharing my experiences in as straightforward a manner as possible so you can draw your own conclusions. Be sure to read all the way to the end!

There have been a plethora of problems with electronics. (And no, Mercury hasn’t been retrograde.) Three different keys to two different cars haven’t worked at certain times, and I’ve had unprecedented phone connection issues. While creating the photo slideshow for my dad’s funeral services, I experienced a series of at least 20 bizarre technical glitches that I’d never encountered before. And last week, this very blog sent out a post from several months ago to email subscribers without any action on my part. I didn’t even know it was possible to resend an old post and was surprised to see it in my inbox!

My daughter and son were in town for my dad’s funeral two weeks ago, and after the service, we met at my house before they went their separate ways, back to Georgia and the NYC area. As they were leaving, I turned on the light on the side of the house so they could see better as they drove away. I went to bed just before 10:00 and fell asleep instantly. When I woke up in the middle of the night, I glanced at my phone to see what time it was and noticed a text my husband sent at 10:22 PM asking me to turn out that light. He was sleeping in the RV, and the light was bothering him. So I went downstairs to turn off the light but saw that it was already off. I assumed he had come inside and turned it off himself. The next morning, I asked him about it and explained that I didn’t receive his text until the middle of the night. He was really surprised because no sooner had he sent that text, and the light went out. It went out so immediately that he found it odd because he wasn’t even sure he’d had time to hit “send”. I also found it odd but didn’t want to jump to conclusions and suspected the lightbulb might have blown out at an uncanny time. So I went over to the light switch and was surprised to find it in the “off” position. As soon as I flipped the switch, the light went on – so it hadn’t burned out after all. It just happened to turn off at the exact moment when Jack requested that I turn it off. 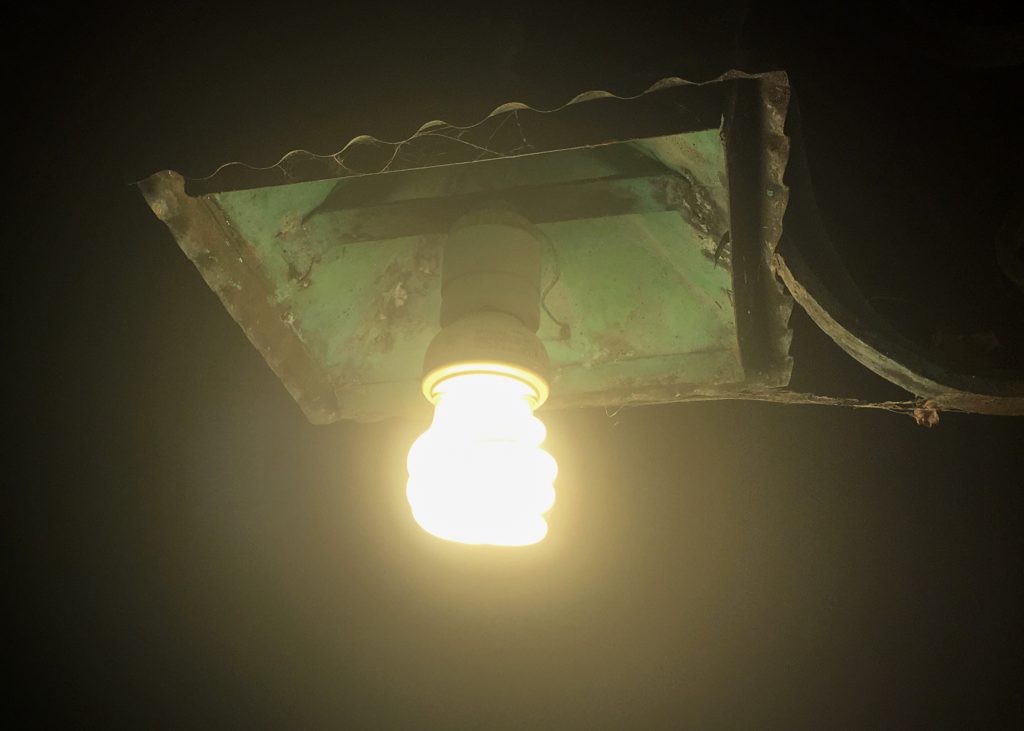 My dad passed away in the morning. That evening when I was at my parents’ house with one other person, we saw a swirl of mist traveling around the kitchen, followed by a significant drop in temperature in the room we were sitting in. At the funeral service at the church a week later, something caught my eye as I greeted the continuous line of people coming to pay their respects. Again, I saw a white mist moving around high above us. It was an overcast/rainy afternoon, and it wasn’t caused by sunlight coming through the windows.

Last night’s experience took the cake.  After spending the whole day at my parents’ house with my sister, I was alone there in the evening finishing up some work on my laptop at the dining room table. The chair I was sitting in had become uncomfortable, so I moved to the couch in the living room. When I sat down on the couch, I looked at my dad’s empty chair – the chair he always sat in – and said out loud sadly, “There’s no more dad here to talk to.”

Just then, the grandfather clock – which hadn’t worked in years – made a soft, chiming sound from across the room. It was not on the hour (6:05 – not the correct time), and I hadn’t heard that clock all day or for a really long time – months or even years, for that matter. The chime sent chills down my spine. Alarmed, I texted two close relatives, and right after sending my text, the clock chimed again. Then I noticed my cell phone battery was getting low, so I got up to retrieve my phone charger. When I walked through the kitchen, I heard a fast, ticking sound that I hadn’t heard before then. It sounded like it was coming from the direction of the cuckoo clock in the family room. When I went closer, I realized the cuckoo clock – which hadn’t worked in decades – was ticking! Again, this was a clock that had been dormant for a long time, and it just started ticking all of a sudden. At this point, I was quite spooked! Not just one, but two clocks had come alive simultaneously!

Even though I was startled and shaking, I sat back down on the couch to see if I could become still enough to pick up on any messages that might be trying to come through. I said, “OK, you have my attention!” and became still and silent, imagining white light surrounding me and filling the room. Then I heard my dad’s voice inside my head. He sounded happy and spoke in the voice he used when he was relaying a funny story or a story of something peculiar that had happened to him (like when my mom’s grandfather came to him in a dream shortly after he died, and when my mom came to him in a dream some time after she died). He said he was with my mom…AND THEN THE CUCKOO CLOCK CUCKOOED FROM THE FAMILY ROOM!!!!

It seemed he wanted me to pass along a message to my sister, who was at his bedside constantly for the last 14 or so hours of his life and was quite shaken by the whole experience. I said out loud to confirm, “So you want me to tell her…” And then the cuckoo clock cuckooed again!

At that point, my shaking hands texted another relative to ask if she’d experienced anything at the house, and she texted me back, saying she had experienced something with the cuckoo clock and her cell phone playing a tune (ringtone) she’d never heard it play before when she sat in my dad’s chair, which really freaked her out.

So it wasn’t just me.

Even though I still felt alarmed, I had to laugh because it was comforting to feel that my parents were there with me and to think of how entertaining or gratifying it must be to make the clocks go off. It seemed to me that making the clocks sound was like making the telephone ring and wondering if somebody would pick up and answer at the other end. And I did.

I continued to have a conversation with my dad in which I told him that I’ll do my best to listen if he tries to get in touch with me and that dreams are usually a good way to communicate if he knows how to do that. Then I told him that I’m going to get going now…and the cuckoo clock cuckooed again!

When I stood up to leave, the (landline) phone rang, and I was afraid to answer it! But I did. Nobody was on the line when I answered. No clicks or anything. Just silence. I said hello at least three times before hanging up. I had been at the house for more than eight hours, and the phone hadn’t rung a single time until that moment when I got up to leave.

After leaving the house, I called my daughter to share the experience with her, and she reminded me that the only other time she’d heard the cuckoo clock sound was right after my mom passed away. I’d forgotten about that. But at the time, it seemed like a big deal.

So, how do you explain THAT? I’m not committed to the notion that hearing my dad’s voice inside my head was actual after-death communication, although that might be the significance I ultimately attribute to it. It could be me working things out inside my own head. Conversations with my higher self. Wishful thinking. Or…who knows what? The way I see it, if you can arrive at some kind of resolution, answer, or insight that truly feels right in your heart and leaves you feeling at peace, it doesn’t matter where it came from. It is part of your healing and growth. I can’t claim to fully understand what I experienced. I certainly know what it felt like and am open to other explanations and possibilities. But in the end, the meaning I make of it is my own, and all I know for sure is that it’s part of my experience and that it left me with a sense of hope, comfort, and peace once I got over the initial shock.

On the morning of that same day, I had an intriguing dream in which I was standing on a bridge and was drawn to stunning orange foliage on trees across the river. Then I noticed the trees moving together in a strange way: First the branches stretched out to the sides and then moved upwards so the foliage was a little higher up from the ground. The trees went through the same movements a couple more times, and each time the leaves traveled higher up toward the sky.

When I woke up from that dream, I felt a little peculiar. I recalled three other dreams I’d had of nature acting in a bizarre way that captured my attention and felt that something was attempting to get through to me. I sensed it might have had something to do with my dad. It wasn’t until I told my sister about the dream later in the day that I realized I was standing on a bridge in the dream. The dreams I’ve had of contact with deceased loved ones always have some kind of boundary like that.

So when I had the experience with the clocks later that day, the dream felt even more significant. I told a couple of friends about my experience and explained, “Well, it’s the time of year when the veil is thin” and recalled writing an article with that title last year at this time. This morning, I pulled up that post and was astounded to read about a similar dream that also began when I noticed beautiful autumn trees.

To be honest, I wasn’t really thinking of sharing these experiences until I read that post from last year and remembered that sharing my experiences is something I need to keep finding the courage to do without worrying about being judged because that kind of sharing is my path. Everyone is entitled to his or her own opinions and theories, and I’m just sharing my experiences without any embellishments or exaggerations, in case it’s helpful to anyone. I’ll let you decide what to make of them.

© 2016 Susan Meyer. All rights reserved. To use any or all of this article, include this exactly: Susan Meyer (SusanTaraMeyer.com) is a photographer, writer, clutter coach, feng shui consultant, and mindfulness teacher whose work is infused with a deep interest in the nature of mind and appreciation of the natural world. She lives on the Hudson River in Upstate New York.