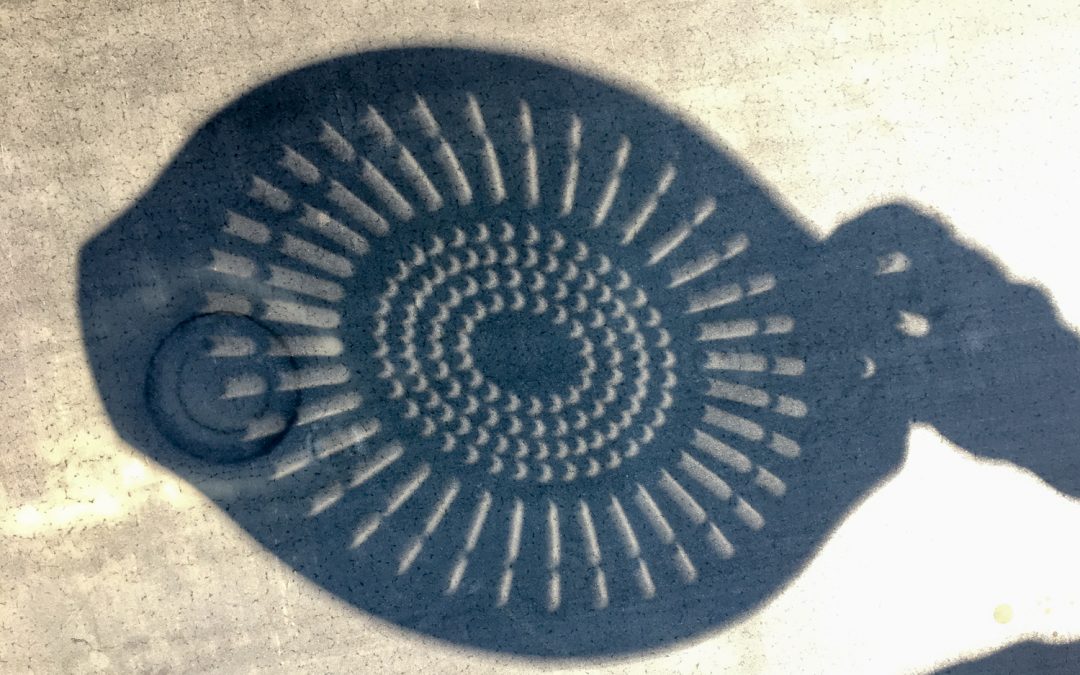 Now that the solar eclipse is behind us, I wonder: What is your eclipse story? It’s a question that can be answered on a number of levels depending on how deep you want to go.

On the surface level… I didn’t get any stunning eclipse photos because I had to work during the eclipse. But that’s okay because lots of other people had their cameras pointed at the sun to capture the phenomenal event. My friend Colleen’s 17-year-old son, who lives in Jackson Hole, Wyoming, managed to capture a stunning image of the eclipse that was selected for the “Daily Dozen” by National Geographic editors out of thousands of submissions, and my buddy, Peter, was able to achieve a quality representation of our partial eclipse via a DIY rig of his Canon Rebel DSLR. And there were many others, as I’m sure you have seen for yourself. Some of the most intriguing images I saw were of sunlight passing through trees and illuminating sidewalk shadows with hundreds of tiny, crescent-shaped lights – like moons, only they were suns.

It was disappointing to have to be indoors during this greatly anticipated celestial event. But when I arrived at work, I was delighted to learn we had permission to go up on the roof to view the eclipse. There were a few pairs of eclipse glasses up there to be shared, along with other viewing options that included a cardboard box pinhole projector and a colander. I watched the eclipse via NASA’s live stream, and when it looked like it was really getting underway, I went up to the roof. The moment I put on the glasses and looked at the moon partially covering the sun was one I always will remember: a WOW moment you might have experienced, too. What a marvelous sight!

I went back to work beaming and feeling supercharged with eclipse energy! I noticed all the people on computers, and it seemed surreal that something so magnificent was taking place in the sky at that moment, and they were indoors staring voluntarily at computer screens. How could you not be blown away by this? (Well, maybe because you didn’t have eclipse glasses or permission to be up on the roof.) I went back up for a second and third glimpse of the astronomical event and was wowwed all over again. The afternoon flew by, to say the least, and since it was quieter than usual, I was able to focus on my eclipse project.

A few days prior to the eclipse, I came across the idea of “Absolute Yes” and “Absolute No” lists in the book, The Art of Extreme Self-Care: Transform Your Life One Month at a Time by Cheryl Richardson. The “Absolute Yes List” is about priorities: What most needs your immediate attention in the next few months and makes you a stronger and better person? When making decisions, you can ask, “Is this an Absolute Yes?” That question cuts through a lot of schedule clutter and keeps what’s most important in sight. It’s also important to be aware of your absolute noes. The “Absolute No List” is a list of things that weaken and irritate you and lead you away from the person you want to be. The day before the eclipse, I started creating my lists while floating in my kayak on the river. During the eclipse, when I wasn’t up on the roof viewing the spectacle through special glasses, I engaged with the eclipse energy by putting the finishing touches on my Absolute Yes and No Lists and setting intentions based on them.

Yesterday morning, I took it a step further. I’ve gotten into the habit of paddling to a quiet spot on the river in the morning and stopping there to savor a cup of tea. Holding the mug of hot tea in my hands, I reflected on my yes and no lists and the feelings behind each item and practiced feeling those feelings. As I sipped the tea, I imagined I was drinking in those feelings that I really thirsted for. I realized that, most of all, I wanted to feel aligned with my Higher Self in both thought and action. Several items on my lists were about making time for self-care in the morning, and I realized that taking time to realign with spirit every morning is essential. This includes not checking email, messages, or social media or focusing on anything else until after I have spent some quality time checking in with myself. In other words, get on the Innernet before going on the Internet!

A couple of intuitive astrologers I follow stressed the significance of the period between this month’s lunar and solar eclipses and the current lunar cycle. They said that the effects of the solar eclipse may be felt for a few months after the actual event and that it is a good time for planning, setting intentions, and resetting/reorganizing your life in terms of what you want to do. Unexpected events, revelations, and endings might happen suddenly on a personal and/or planetary level, and it’s all part of a cleansing process.

I love a good metaphor, especially when it comes from the natural world. Whether or not you believe in astrology, the solar eclipse offers metaphors that can take your experience of it to a deeper level so that what happened celestially mirrors or activates something in you. For example, during a solar eclipse, the shadow blocking the light is exposed, and you can put on special glasses that give you the ability to actually see what is blocking the light. On an intrapersonal level, this translates to getting a glimpse of your shadow self and the unconscious blocks that might be sabotaging you and perpetuating illusions that you believe to be true about yourself and others. It can be inconvenient or even scary to become aware of your shadow side or the unconscious blocks and self-sabotaging factors that have been operating in your life behind the scenes. But these realizations are ultimately positive because becoming aware of your unconscious material is a first step in setting yourself free, which is something that can’t happen when it remains hidden. It is an opportunity for clarity, disillusionment, and empowerment.

When I ask about eclipse stories, this is what I’m getting at: stories involving life-changing realizations and events. Epiphanies. Things you cannot unsee once you’ve seen them, much like the moment I put on the special glasses and saw the shadow of the moon blocking the sun. My own eclipse story seems to begin last weekend, when I ended up at The Abode of the Message by “accident”. Being there helped me to realize I have a need to be part of a spiritually supportive community, and I put that high up on my Absolute Yes List.

The day following the eclipse, I had a conversation with some co-workers during which a sentence came out of my mouth that felt a little too honest and self-revealing. Walking away from that conversation was a WTF moment that lingered as I floated on the water the next morning. It was an opening to a surprising realization that explained quite clearly why I haven’t had more success in a certain endeavor – a feeling that I have been misplacing my energy. My speech (which reflects attitudes, beliefs, and feelings) was blocking and even sabotaging my best efforts. Once I glimpsed that block, I couldn’t unsee it and realized I need to make some changes: Either do the work to remove the block or let go of the endeavor, and move towards something that feels more aligned with who I really am and what I really want.

Similarly, since the eclipse, I’ve also been able to see more clearly the shadow side of others, which allows me to act appropriately and set healthier boundaries based on the clarity that seems to grow stronger every day. Again, disillusionment provides an invitation to either change yourself or your perceptions in some way or to let go of unhealthy relationships. Whatever you do, you can’t unsee what was hidden previously or continue on, status quo.

So, that’s my eclipse story so far. I might have missed out on photographing the eclipse this time around, but I hear that in 2024, our area will experience a total solar eclipse – and I will be ready for it and will make sure I don’t have to work, even though it was fun and memorable to hang out with coworkers on the roof viewing the eclipse through special glasses, cardboard box pinhole projectors, and colanders. And perhaps at that time, while looking through the lens of my camera at the shadow of the moon blocking the sun, I will reflect on the amazing and surprising ways my life changed course after the eclipse of 2017 when some pretty important truths all of a sudden became visible to me.

I wish the same for you.