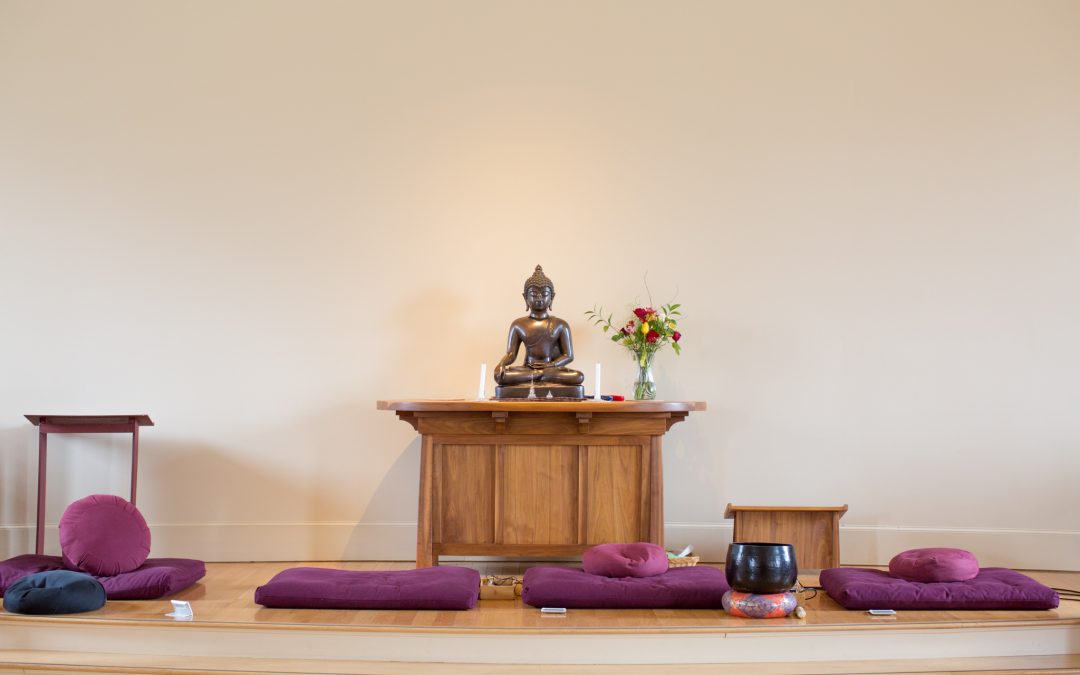 I’m really glad I went to dharma meditation group this morning, even though I was five minutes late. It might have been because I got out of bed about a half hour before I needed to leave, and someone beat me to the bathroom, so I had to wait a few minutes. At any rate, by the time I left the house, I realized I would be a few minutes late.

What were my options?

The group meets in a wellness facility. A room at the back of a gym. When I got to the door, it didn’t feel right to sit outside the room. It felt more right to enter quietly.

Ever so slowly and mindfully, I turned the door handle, opened the door, and walked towards the meditation blankets and cushions, feeling each slow-motion, bare footstep making contact with the hardwood floor. It was a very short walk of fewer than ten steps, but in the piercing silence of the meditation room, it felt intrusive nonetheless.

I sat down silently on my cushion and tuned in to what was going on in my head and body. Most of all, I hoped I didn’t disrupt anyone’s meditation. Do I have a right to be here? Was it selfish to come in a few minutes late?

In meditation, you work with what arises, what shows up. For me, it was the voice in my head that didn’t want to bother anyone or act selfishly. I took a couple of deep breaths and did a body scan, which revealed energy in an area that often feels imbalanced, in a nook right below the center of my rib cage. So I directed my attention there, like a flashlight.

There was some panic in that spot. I was tempted to focus on my breathing instead of the tension. I noticed some resistance to being intimate with that energy and noted: Resistance. Then I realized there was a tender and vulnerable energy beneath the panic and investigated it. It seemed like a young child, and I heard: Am I lovable? Is it okay to make a mistake? Do mistakes make me bad?

This energy called for presence, not for the logical mind to step in and fix things and avoid connecting with and feeling the vulnerability. The childlike sweetness and purity of the questions touched my heart. I wanted to care for this little child.

But then I got distracted. I noticed the sounds outside the door: the whirring of an exercise machine moving very fast with an intensity that was in stark contrast to my stillness on the cushion. I heard voices talking. Were they louder than usual? OH NO! Did I not close the door all the way? Am I responsible for ruining everyone’s meditation?

Paying attention, I once again noted: Panic. I stayed with the source of that energy.

A few minutes later came the most dreadful realization of all: I FORGOT TO TURN OFF MY PHONE! Oh dear God, no! Please don’t let my phone make any sounds! What are the chances I will get a phone notification before the meditation bell rings? Okay, so I have a choice right now. I can hope and pray my phone will remain silent until the meditation is over. Or I could very mindfully and as quietly as possible reach for my bag, unzip it at a snail’s pace, and turn off my phone. Which would be least disruptive? Waiting for the bell did not seem as empowering a solution as turning off my phone. However, I decided to take that risk. Oh meditation bell, please ring soon!

Panic. Choice. Choosing to wait for the bell to ring. Questioning that choice. Noticing the temptation to criticize myself.

Then the bell rang, mercifully. I breathed a sigh of relief and turned off my phone.

After a brief break and dharma talk, we meditated again. I returned to the vulnerable energy at the base of my rib cage and placed a hand on that area to flow Reiki – unconditional love – to it. The energy wasn’t asking for reassuring explanations. It needed love. So I nurtured it with loving presence. How often do I shush that voice and focus on something else, thereby diminishing its importance and not hearing what it wants to tell me? And therefore not giving it what it needs.

After a few minutes, the energy calmed and cleared.

Then I noticed the voices outside the door again. The glorious voices! They were still loud. But that meant I didn’t mess up! It’s just the way the sounds are in that room. Maybe others were irritated by the voices and wished they would be quieter and less disruptive. In which case: Irritation. Desire.

Maybe some were grateful for the sounds of the voices bringing them back from wherever their mind had wandered. Returning. Appreciation.

Maybe when some people come in late, they squelch the voice that wonders if they are lovable, or maybe that voice doesn’t arise in them as it did in me. Maybe they assert their right to be here, and screw anyone who has a problem with it! (Thought bubbles over a roomful of meditators would be hilarious, heartbreaking, mundane, and everything in between.)

In the past, I sat next to people who came in late during meditation and noticed the sound of their rapid, shallow breathing, as if they’d been rushing. Compassion arose in me, and I radiated love to them and honored their intention to practice. Who knows what they went through before arriving. Their determination to attend meditation group was greater than whatever obstacle got in the way. Good for them!

I’ve also witnessed a meditator scowl at a latecomer. And I judged the scowling, thinking: He should just focus on his own breathing and reactions rather than get upset with someone who decided to show up after all. And then I caught my reaction. Judging. Storytelling.

Hello, Ego, my old friend. You nearly pulled me in again.

An observer might think it looks like everyone in the meditation room isn’t doing anything. But there’s so much that arises as invitations for awareness, healing, compassion, self-compassion. You work with whatever shows up. That’s the practice. When other people are involved, there’s an abundance of opportunity for practice because relationships are perhaps our principal means for learning in this world. But there’s plenty of opportunity when we sit alone in a room, too. There’s no shortage of material to work with, whether alone or with others.

At the end of the meditation group, an older woman approached me and complimented how quietly I entered the room and said she wishes others would come in so quietly. She told me she’s glad I came. Someone else might have a different response, a different story, different habits.

But you know what? The energy that arises in me is what I have to work with, and I felt good about how I handled it today, for the vulnerable, child energy received what it needed. The more I can accept and love all the parts of myself that arise, the more cleanly I can relate to others.

Of course, it’s important to get to meditation group on time. But if you are a few minutes late and choose to enter the room – or even if you’re on time or practicing alone – pay attention to the voices and energies that arise. They are there for your healing and liberation. All of them.

© 2019 Susan Meyer. All rights reserved. To use any or all of this article, include this exactly: Susan Meyer (SusanTaraMeyer.com) is a photographer, writer, clutter coach, Reiki practitioner, and mindfulness meditation teacher whose work is infused with a deep interest in the nature of mind and appreciation of the natural world. She lives on the Hudson River in Upstate New York.