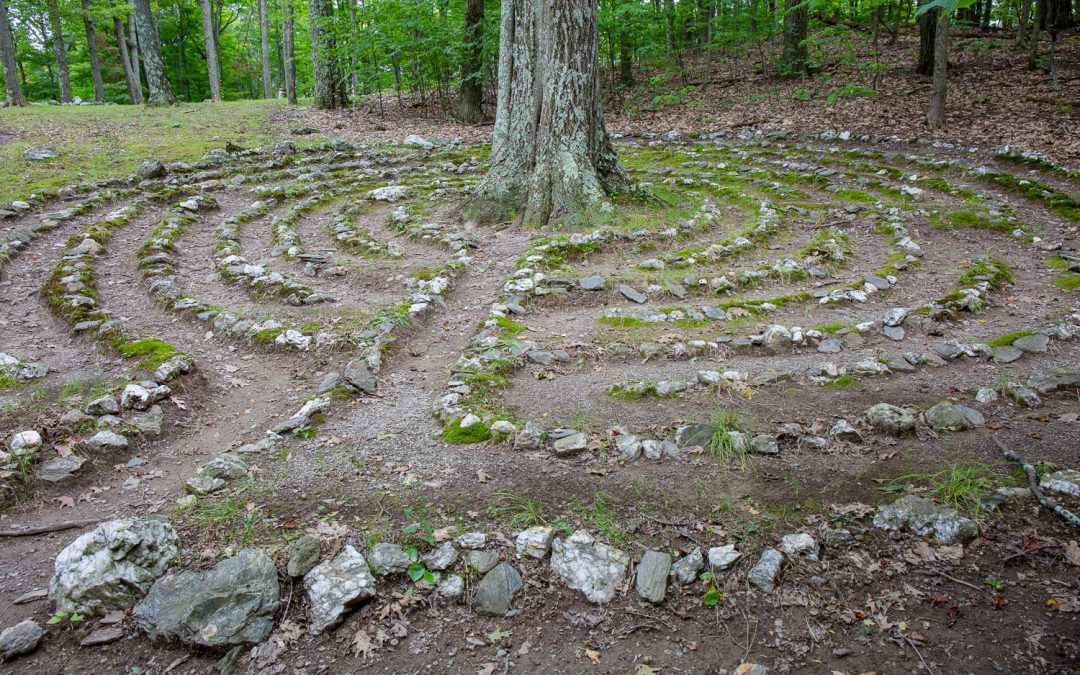 I’ll begin with the all-too-human part.

I’ve been in a waterfall mood, eager to explore new waterfalls closer to home, to hold me over until I get to Ithaca again. I did some research and found a nature preserve within a one-and-a-half-hour drive that has 12 miles of hiking trails with some waterfalls. After looking at pictures on Google, I placed it high up on my to-do list.

This morning, I was itching for an outdoor workout, had hiking on my mind, and thought about that nature preserve. Jack was preparing to go to a music gig with his band. I couldn’t remember where, but before leaving he said it would be a nice drive through some pretty towns and mentioned the name of the town where the nature preserve is, which he said was close by. I thought: Wow! What a coincidence! Sounded like an opportunity, so I asked if I could tag along and had 15 minutes to get ready.

As we drove closer to where the gig was, my GPS indicated we were getting further away from the nature preserve. Something didn’t make sense. If we were going to pass through that town, why was it twice the distance now from the gig location? Eventually, I realized we were headed in the opposite direction. Turns out the name of the town with the waterfalls was similar to the name of the county where the gig was; hence, the mix-up, and I became quite upset. I’d just finished up a week with a much heavier than usual workload and had my heart set on hiking and photographing a waterfall. Now that plan was foiled, and I didn’t have a plan B.

When we arrived at the gig, I got my bearings and was determined to find a place to be in nature and walk off my grouchy mood. I discovered we were only 17 minutes away from The Abode of the Message, an Eco-Sufi village in New Lebanon, NY. (If you are familiar with Omega Institute, you might be interested to know that The Abode is where Omega began.) In 1995, I was initiated into what is now the Inayati Sufi Order and was active in the Ithaca Sufi Center when I lived there. For years, I worked with my beloved spiritual director, Alice, who gave me practices to do on a regular basis. Eventually, I left Ithaca, was completely immersed in raising my children, and didn’t live close enough to a Sufi community to stay involved. Over the years, I stopped asking Alice for Sufi-specific practices, although every time I sit down to meditate, I still recite the Sufi invocation, and when I thirst for spiritual nourishment, I turn to the great Sufi poets: Rumi, Hafiz, and Kabir. In fact, a book of Hafiz poetry is the only book I keep in my bedroom.

So I drove to The Abode, feeling deep humility for getting so upset. Between the lunar eclipse on Monday and Mercury and lots of other planets being retrograde, astrologers have been cautioning to take it easy and be mindful because tensions are running high, and misunderstandings and drama can arise easily. Lots of shadow material is coming to the surface. Despite having fair warning, I still got caught up in the energy. I should have been more mindful! After shedding a few tears, I decided to allow myself to be human and not get down on myself for overreacting.

As I got closer to The Abode, I noticed several signs and flags that carried political and religious messages that conflicted with my own ideas and bothered me. Then I finally turned onto Shaker Road and drove the last few, familiar miles to The Abode, past a Shaker Museum, where the energy felt different and welcoming.

It felt great, as always, to arrive at The Abode. It was like returning home to my spiritual tribe. The moment I got out of the van, I realized there were no accidents, no mistakes. I was meant to be at The Abode today. Amazingly, the Abode called me back to it, even though I had my heart set on being somewhere else and pitched a fit when my plans fell through. But that was over now, and I was where I was supposed to be.

I had some lovely interactions with a couple women who lived there and learned that my timing was perfect. The Spirituality in Medicine program participants were on a lunch break for the entire time I’d be there, so the Meditation Hall (where I’d attended Universal Worship services in the past) was accessible.

Had I shown up the previous weekend, the main grounds would have been largely deserted because everyone (females, anyway) moved up to the Mountain Camp for the well-attended Wild Woman Fest ’17. I heard all about it. It sounded amazing and powerful, and I knew I needed to hike up to the Mountain Camp to experience the feminine energy still lingering in the air. Before hiking up the steep path to the Mountain Camp, I asked one of the women if there’s a labyrinth up there, and yes, there was. Awesome!

Waterfalls and labyrinths are the two things I love to discover. I had planned to explore new waterfalls but ended up walking a labyrinth in the forest.

I was all alone up in the Mountain Camp on Mount Lebanon, which was sacred ground to the Native peoples, the Shakers, and then the Sufis. When I spotted the ruins of the sanctuary that burned down years ago, the mesmerizing sound of an enormous wind chime greeted me, its wind catcher gliding and twirling gracefully in the space below the long, metal tubes. 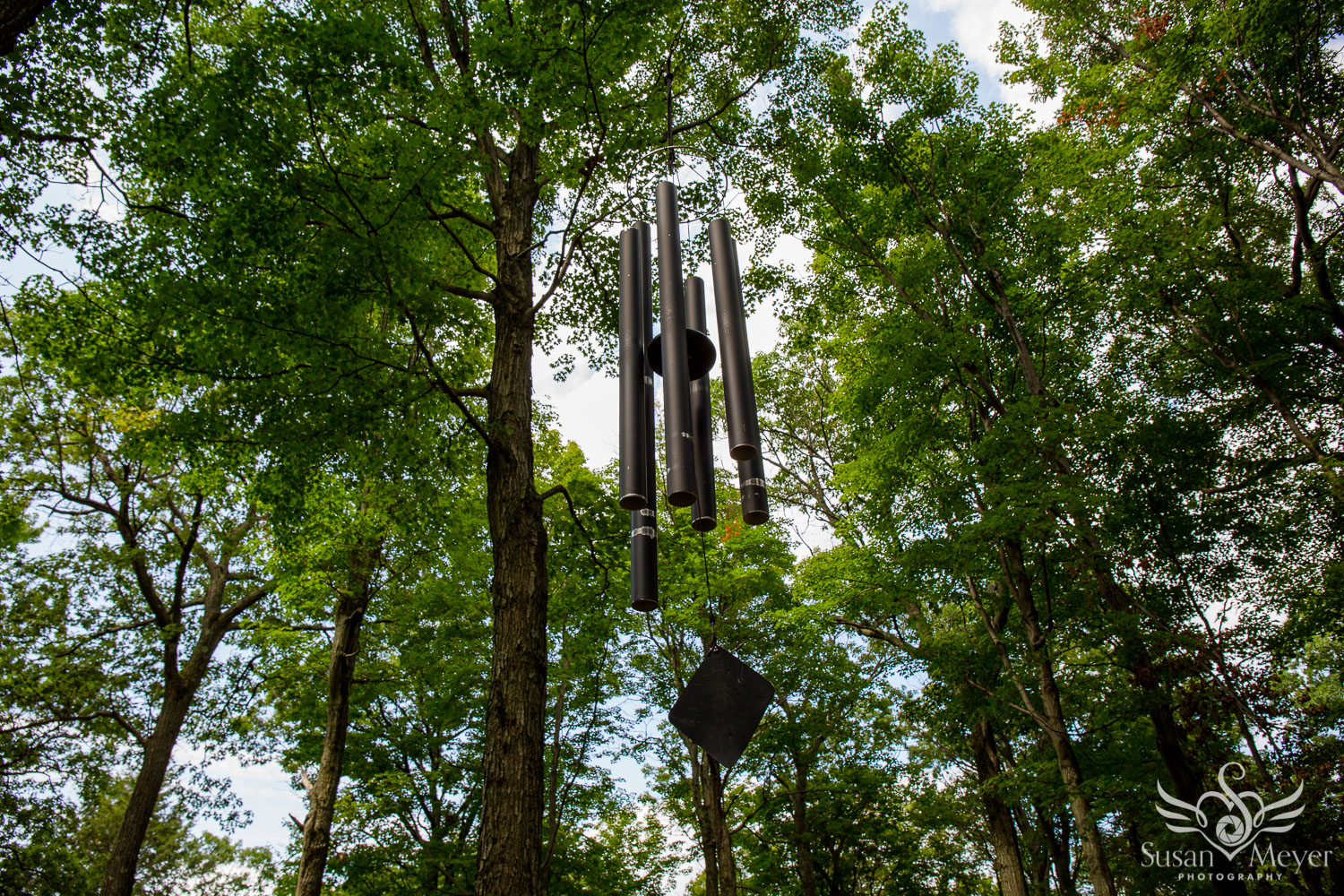 The forest was silent except for the sounds of the wind chime, birds, crickets, and other late summer insects. The labyrinth was adjacent to the sanctuary ruins, with a large tree at its center. In complete solitude, I walked the stone-lined path to the center, strewn with tiny acorns, mushrooms, moss, and some autumn-toned maple leaves. 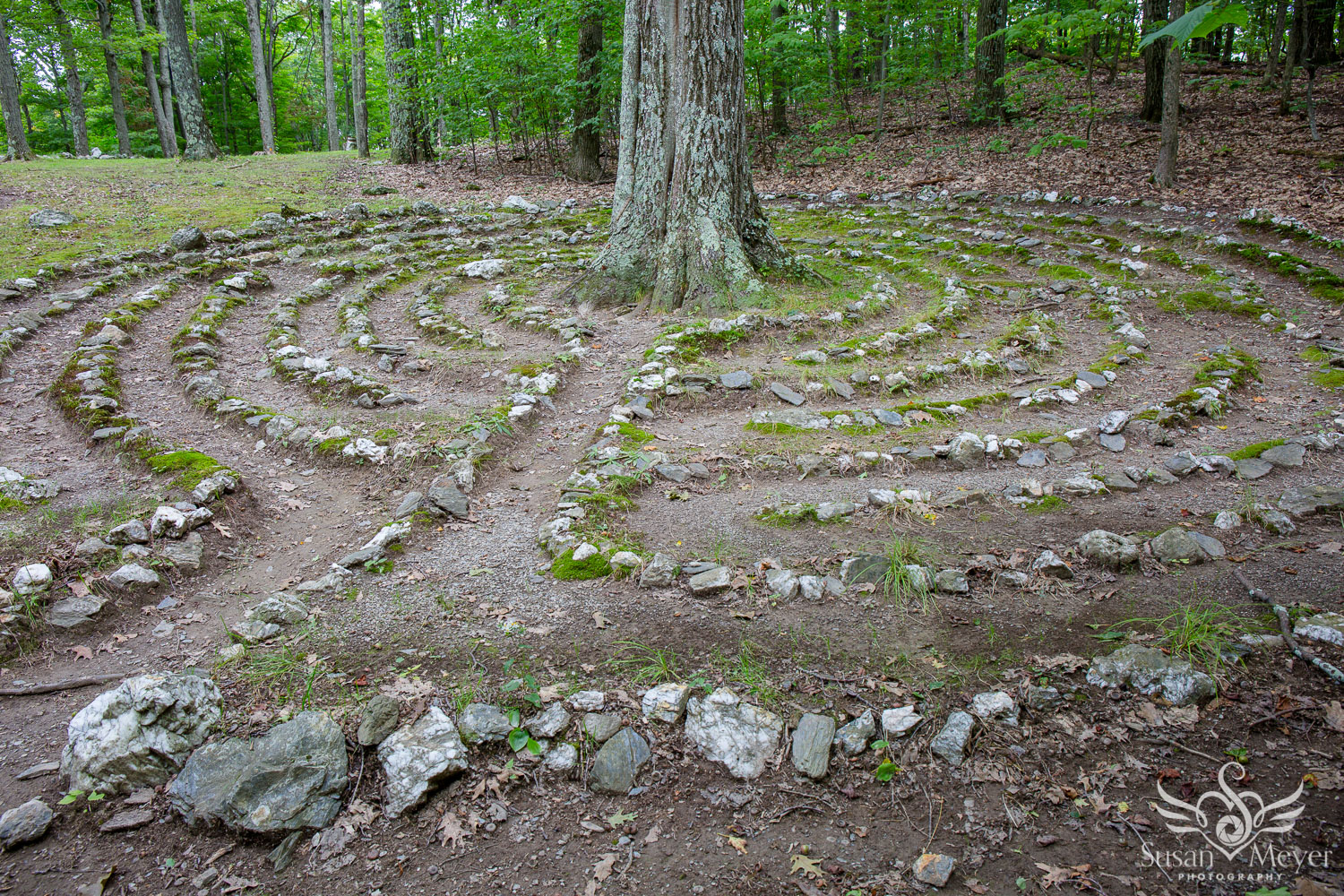 On my way back from the center of the labyrinth, I came to a turn that seemed like it would bring me right out of the labyrinth and felt a pang of disappointment because I wasn’t ready to leave yet. I wanted to stay in the labyrinth a little longer. And in that instant, the labyrinth became symbolic of a human lifetime, which so many people get pulled out of before they feel ready…so enjoy the journey, every step of it! I also realized there is no such thing as going off the path. Everything we encounter and experience is on the path, including the shadow material that arises and humbles us. There are no wrong turns. We are always on the path.

As I walked back down the mountain, my emotional reaction earlier seemed even more foolish. I had become upset because I didn’t end up where I wanted to be, when the Universe had something even better in store for me.

I also thought about the signs and flags that bothered me on my way to The Abode and saw them as a spiritual litmus test that offers feedback about where I can open my heart more fully and grow. Hazrat Inayat Khan, founder of the Inayati Order (formerly the Sufi Order of the West) explained, “Sufism is the religion of the heart, the religion in which the most important thing is to seek God in the heart of humanity.” Sufis seek to develop the heart by finding divinity in all creation. Rumi, Hafiz, and Kabir all wrote about this. It is something I have been struggling with lately as so much shadow material has been arising globally, in the U.S., in interpersonal relationships, and in myself. Coming back home to The Abode reminded me of the importance of seeing divinity in all beings, and I really needed that reminder: I am a manifestation of divinity in this life, and so is everyone else. It seems like a critical reminder during chaotic times. Tuning our hearts to a higher frequency is not always easy, but I think we collectively are being called to heal the shadow energy that is coming to the surface en masse, beginning with ourselves so that when we come across signs, flags, and people with messages that contradict the truths we hold as self-evident, they don’t ruffle our feathers. Then we can have a clearer, less reactive sense of how to engage.

A few days ago, I was working at the library, and a book, The Radiance Sutras by Lorin Roche, landed on my desk. It had an inviting energy to it, and I opened to the page that was bookmarked and read the following poem:

Beloved Soul Mate –
Find the space in the center,
The pulsing spaciousness
Encompassing all opposites.

Here the essences of creation are at play:
Earth, Water, Fire, Air, and Space,
And the senses that perceive them.
The center is the dancing ground.

I think that is an excellent starting point. And I think there is guidance all around if we open ourselves to it, like books and places that pull us to them when we are looking for something else.