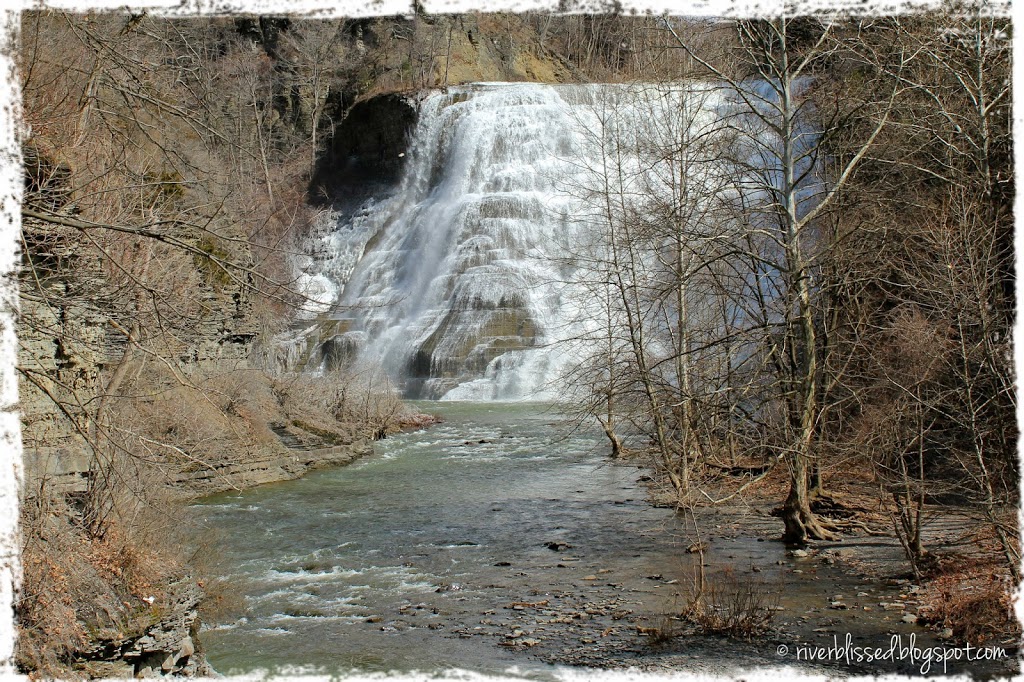 “We are here to find that dimension within ourselves that is deeper than thought.”  -Eckhart Tolle

It’s a school vacation week, and I spent a few days on a solitary, spiritual retreat in a cabin on a hill in Van Etten, New York at a retreat center aptly named Light on the Hill. I have been visiting Light on the Hill since 1990, which was around the time it began, and have done so much deep, transformative work there that I feel “all my changes are there.” My husband and I even got married there. It is a very special place, run by a very special couple, Alice and Larry.

I met Alice when she was a religious studies professor at Ithaca College. I enrolled in her Introduction to World Religions course and was so drawn to her energy and teachings that I took a course with her every semester. As her student, I recall Alice talking about her dream to operate a retreat center and how perfect it was that the man she was soon to marry owned some land. As she eased into retiring from academia, she and Larry were busy behind the scenes building their shared dream. To see how it has grown and blossomed since those early days is truly astonishing and inspiring.

Alice and I have remained in contact all these years. She became my guide in the Sufi tradition, she and Larry officiated at both of my weddings, and she assisted me during the homebirth of my son. I could go on and on about the important role(s) Alice has played in my life, but the purpose of this post is to describe the retreat process as I have experienced it at Light on the Hill.

I feel called to Light on the Hill when I am at a crossroads or in the “valley of unknowing” and seek clarity and direction. I embarked on this week’s retreat with a specific intention in mind. During the course of a retreat, one is drawn more deeply in touch with the divine Self each day.

To prepare for the retreat, I intuitively withdrew from technology for a full day before leaving. The four-hour drive to Light on the Hill (which included an out-of-the-way stop at my favorite waterfall in Ithaca) provided further preparation and a rare opportunity to photograph Ithaca Falls without anyone else around. 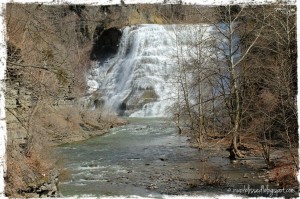 From Ithaca, it’s about a half-hour drive along country roads. Light on the Hill is located a mile up a dirt road that climbs a hill, taking you away from the distractions of ordinary life. And then you go even deeper as you drive slowly along the narrow road to the cottage. 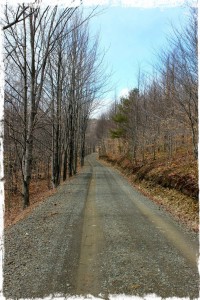 By the time you arrive, you have a sense of being nestled deeply and protectively in the sacred space on the hill. Such peace.

I stayed in the Meadow Cottage, which is also where my husband and I spent our wedding night. Over the years, I have stayed in every cottage and hut on the land. Prior to this week, I had experienced Light on the Hill during every season except spring. 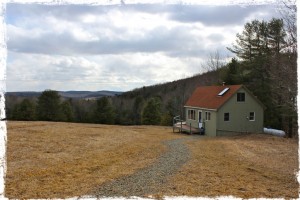 There is no electricity in the Meadow Cottage, but it is heated and very comfortable. There is a kitchen, bathroom, and living room downstairs and a sleeping loft upstairs. The sofa downstairs also converts to a bed. The refrigerator and heat run on propane. There is a gas stove in the kitchen, and you turn on a generator for a hot shower and to flush the toilet. 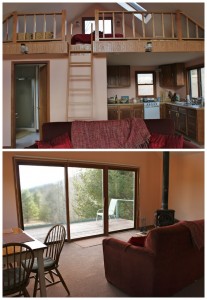 The windows and sliding glass door open to a picturesque view of the meadow and distant hills. The sounds of spring were all around. 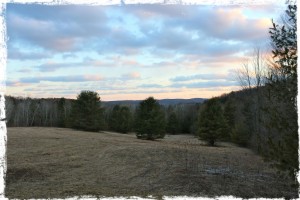 Here is the view from the windows by the table: 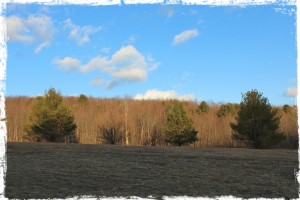 In the past, I have gone on fully guided retreats as well as unguided retreats. This time, I chose a partially guided retreat, which means that Alice visited the cottage to sit with me once (rather than twice) each day. She is highly intuitive and brings practices that she discerns will facilitate spiritual attunement and growth. I received some guided meditations on CD and inspiring conversations and teachings on cassette tape (with battery-operated players), along with some handwritten instructions for practices and a few quotes to contemplate. 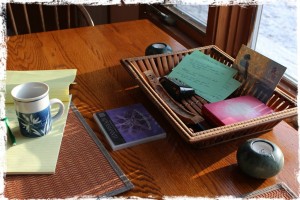 I spent the next 24 hours (until meeting with Alice again and receiving new practices) engaging with the meditations and practices, doing some yoga/movement, and taking walks. 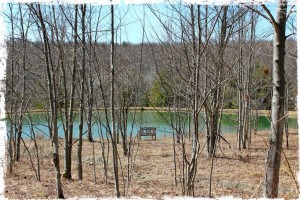 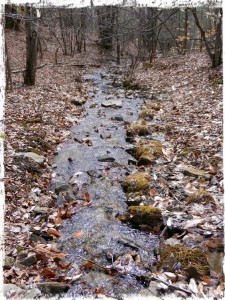 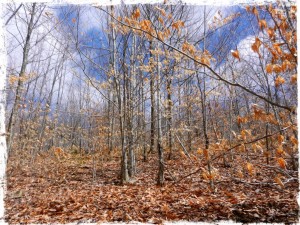 Walking, meditating, resting, moving, dreaming – it’s all part of the process. Slowed down and removed from the usual distractions, I find that I intuitively know what to do, what to eat, etc. It feels as if my soul is guiding me, and I am still enough to hear it. The soul connection is much stronger than in normal daily life, and it deepens each day on retreat. There is a momentum that builds and is difficult to describe in words.

As I was settling in to the practices, I heard (in my mind):

…which made me laugh.

Each day, I walked the 11-circuit labyrinth (based on the Chartres cathedral model), letting the 34 turns of the labyrinth work their magic on me. A symbol of wholeness, a labyrinth is different from a maze in that there is one pathway from the entrance to the goal (in this case, the center), with no dead ends. If you keep walking, you are certain to arrive. My time in the labyrinth was especially powerful and transformative. I don’t know if this is true for others, but there is a certain point in the labyrinth where the insights seem to come and really take hold. There is a pile of smooth rocks near the entrance to the labyrinth, and I carried one with me each time and offered it when I arrived at the center. 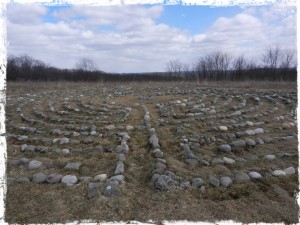 Not long after meeting with Alice in the late afternoon, Larry arrives with dinner in a lovely basket. In addition to being a dedicated caretaker of the land and facilities, he is a fabulous cook. The meals are vegetarian, as meat and sugar are best avoided while on retreat because of the effects they have on one’s energy field. I always look forward to Larry’s nourishing meals. This one featured rice pasta with a delicious, puréed sauce. 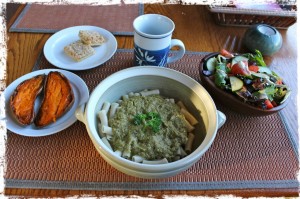 After the sun sets, I light the mantle on the gas lanterns on the wall and continue doing my work next to the warm glow of the wood stove. 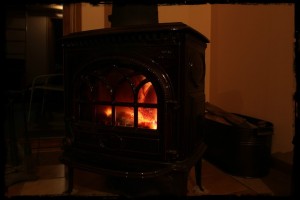 Eventually, it’s time for sleep. I find that I go to bed much earlier on retreat than I normally do, and I think the retreat rhythm is closer to my natural rhythm. You have to climb a ladder to the sleeping loft, and therefore you can’t bring much with you. I bring a notepad, pen, and a small headlamp. Note: It is not necessary to climb in order to sleep, as there is a pullout sofa bed in the living room. Also, the woods cottage has downstairs bedrooms.

Multitudes of stars shone brightly in the clear sky through the window and skylight over the bed. So peaceful and comforting. I was tempted to do some astrophotography but felt it was more important to get some rest.

Dream work is an important part of the retreat process. I record my dreams on the notepad and work with the content the next day. 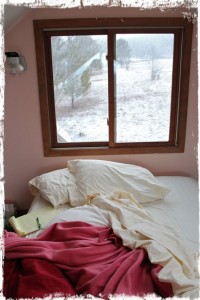 Here is the view to which I awakened in the morning: 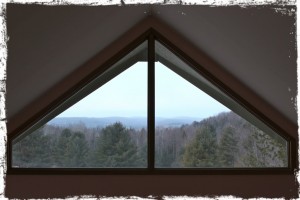 The first morning, I woke up to a snow-dusted world. I drank some hot water with freshly squeezed lemon juice and watched the snowflakes dance through the air. My first insight of the day came from the snowflakes:

Water is not content to stay still.
It constantly moves and changes form:
A snowflake. A tear. A river.
A snowflake does not expect
To remain a snowflake forever
But enjoys dancing its way to the ground.
In its brief time as a snowflake,
It gives its all to being a snowflake.
Then the sun melts it,
And it is time to move on.
Let’s melt and become a puddle
Then soak down and nourish the plants
And then?
And then?
And then?

Thus spoke the higher Self.

Throughout the course of the retreat, I did experience guidance and clarity with regard to my original intention and also had some time for some unanticipated, additional work that Alice’s inquiry and intuition felt was important. I have complete trust in her, which is important when working with a guide. It is a trust that has developed through the decades, and I feel so blessed to have her in my life. She is an amazing teacher and healer.

I appreciate that the journey back home takes quite a while. After being on retreat, the energies of the world feel very dense, and I prefer to ease myself back in. I stopped again at my favorite waterfalls in Ithaca, and experienced more people than usual smiling at me and approaching me – remarking about my starry shoes or that I’m “obviously” a professional photographer (::smile::). I think I was radiating a higher energy than usual. The quality of my energy after being on retreat also reminds me of the value of making time for daily meditation, prayer, and reflection. I see the image of a dusty attic with the sun shining in through the window. Meditating is like sweeping the dust from the floor and cleaning the window. Doing this daily makes a difference in your life and how you view the world around you. It creates a sense of spaciousness. Going on retreat – especially a guided retreat – is like doing deep spring cleaning!

I find it rather interesting that as I was writing this blog entry, a cardinal landed briefly on my windowsill – just long enough to get my attention before flying away. I have been trying to photograph a cardinal for weeks and haven’t been able to get close enough. It’s as if this one came to me. Post-retreat magic!

You can visit Light on the Hill’s website by clicking HERE.