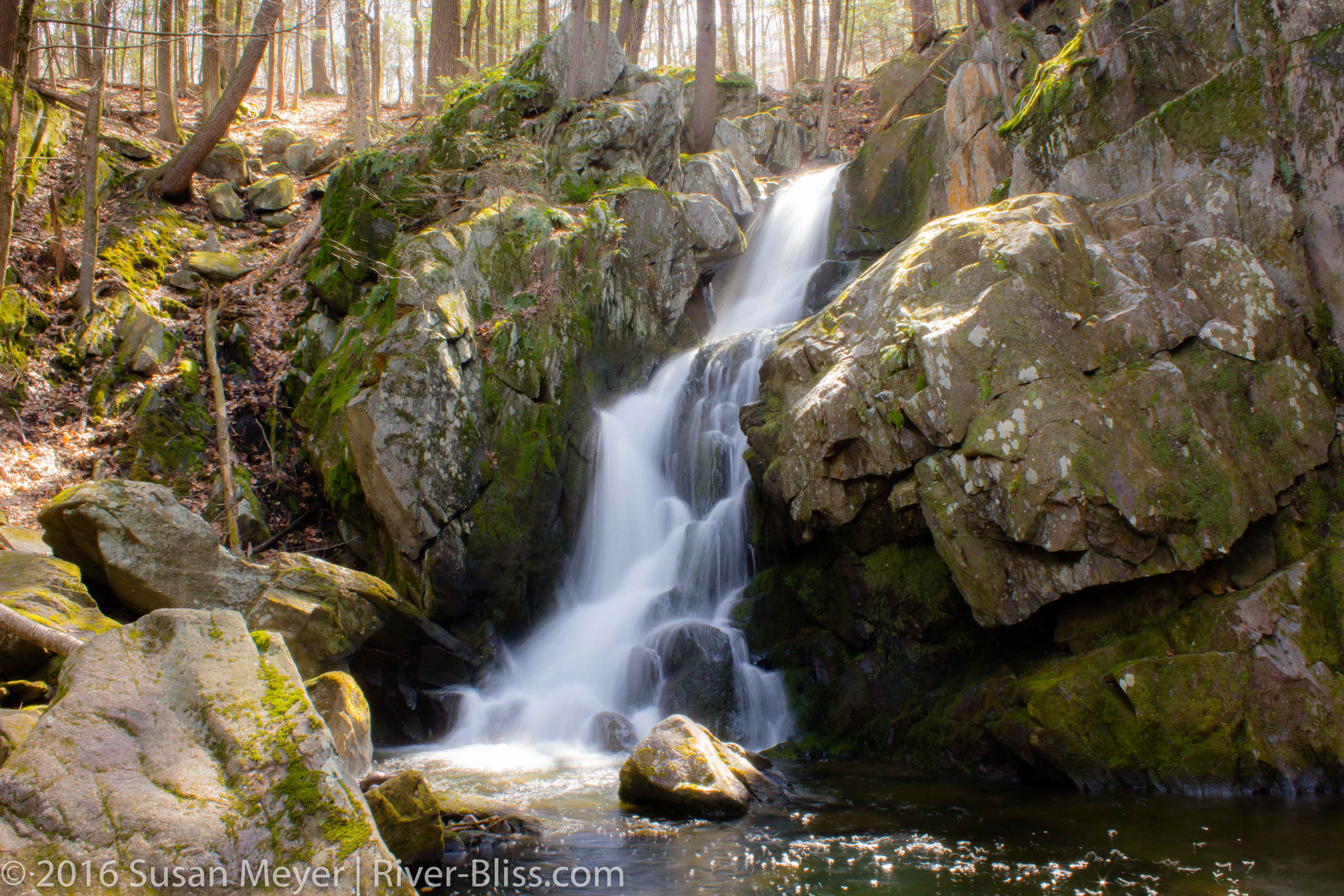 What a difference one week makes! After the balance of sunlight tipped in favor of the Northern Hemisphere last week, I wasn’t ready for winter to end – which might be a first. Winter is the season of going inward, reflecting, and preparing for a new season of growth, and I wasn’t ready for the daffodils to shoot up so soon because my winter work wasn’t done. Although I was as thrilled as ever to hear a chorus of spring peepers for the first time when I drove by the creek one evening, at the same time, it felt premature. I needed more time! I was not ready to emerge from underground and shoot up with the daffodils and grass because I remained unclear about where I wanted to focus my energy and how I wanted to grow!

Mercifully, a week later, the energy has shifted. Now my energy is concentrated on a single purpose, and the seeds sown within me are ready to grow in the world. Apparently, I was right to trust the process and to believe clarity would arise in time – just as the plant world awakens every spring following a season of necessary dormancy. It was bound to happen.

As plants began invisibly sending out their roots, I found myself returning to both my spiritual and my photography roots. The waterfalls of Ithaca, NY provided my original inspiration for picking up a camera (an old Canon point-and-shoot) nearly 30 years ago, and in recent weeks, my passion for waterfall photography was reignited in full force. This month, I visited two waterfalls I’d never been to before. One was on a road I lived on when my children were young. I must have driven by it on nearly a daily basis but never noticed it! It’s an example of the countless opportunities and blessings that are overlooked when we’re caught up in our daily routines and don’t think to turn our heads a little more to either side and notice what exists in the periphery. 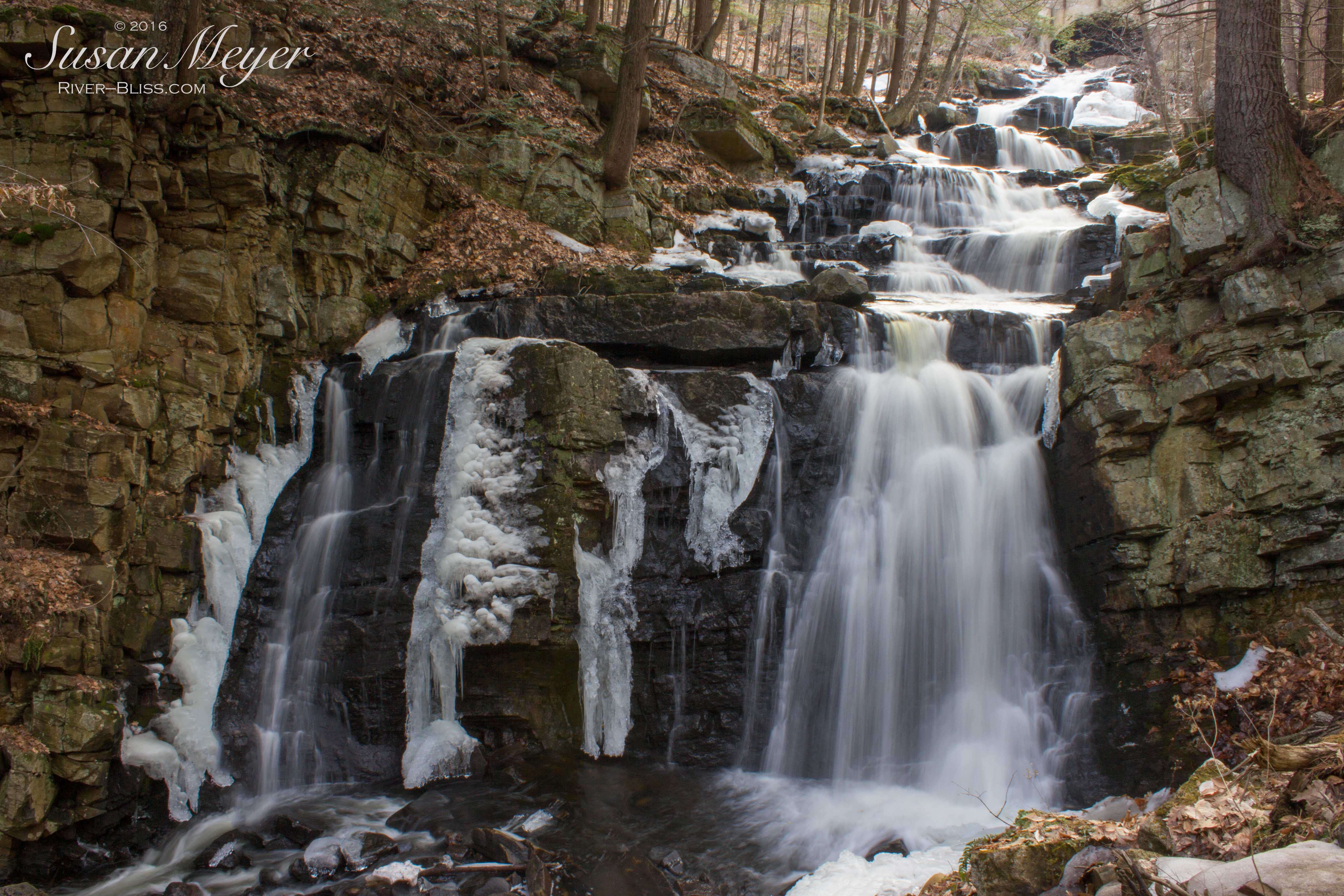 As I processed my photos of that waterfall, I was drawn to the large rock in the middle of it (that resembles a turtle). 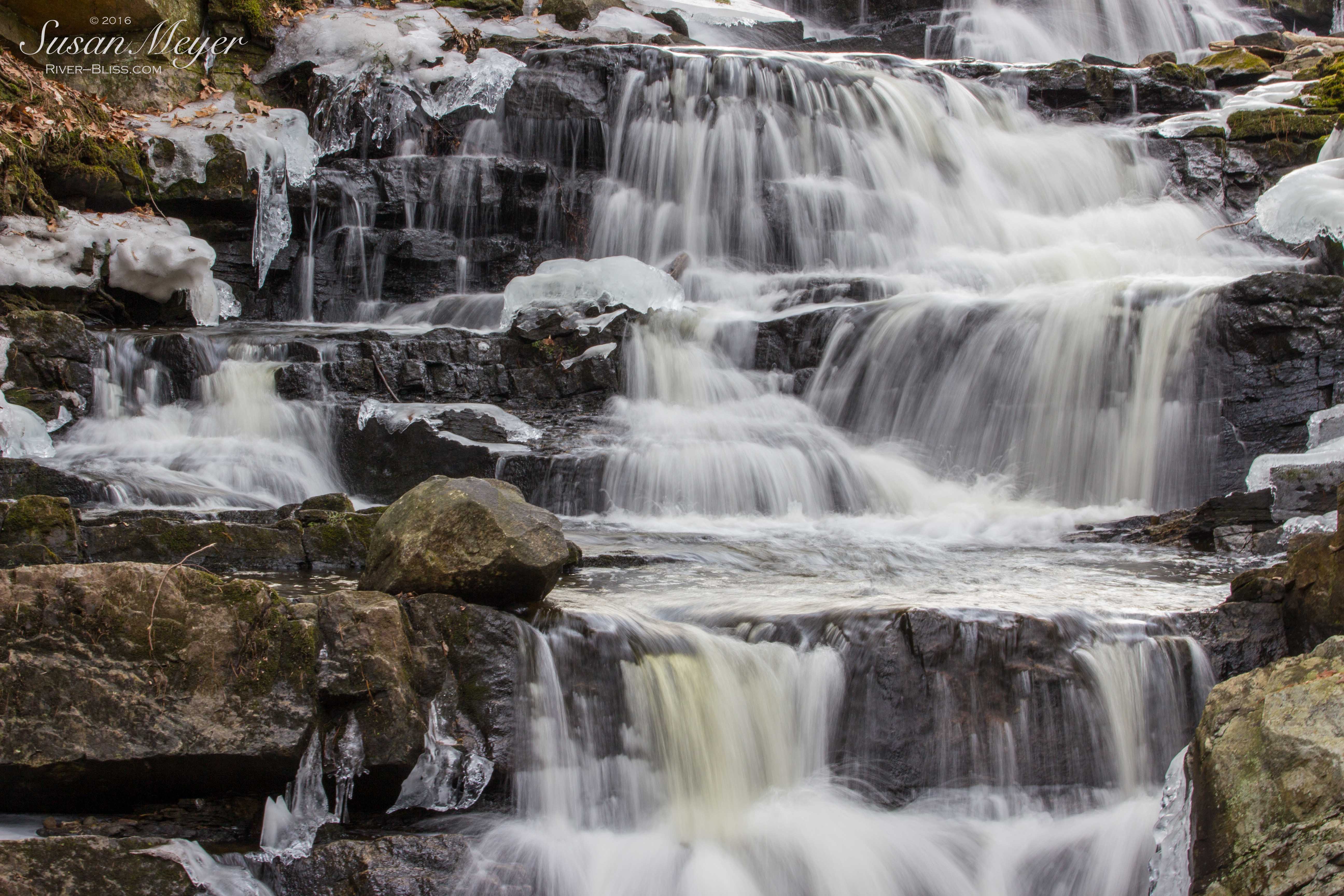 It reminded me of a quote from Sufi master, Hazrat Inayat Khan:

“Stand through life as firm as a rock in the sea, undisturbed and unmoved by its ever-rising waves.”

It’s not the sea, but it speaks to me of believing in yourself, standing your ground, and being centered, even when there are many different streams of activity flowing around you and so much stuff going on that it can become distracting and feel overwhelming.

On Easter, I visited another waterfall and spent more than two hours in complete solitude working and worshipping in what felt like a private sanctuary. I sang, cried, prayed, gave thanks, and took plenty of photographs as the negative ions worked their waterfall magic on me.

In addition to returning to my photography roots, I recently had the great pleasure of returning to my spiritual roots and photographing the interior of the church I attended as a child. I hadn’t been inside the church (which has been converted into a performance and event venue) since I was nine years old but had vivid memories and dreams of the entire interior. I’ve been wanting to photograph it for years. Once, a few summers ago, I tried to enter, but the doors were locked, nobody answered the doorbell, and I never tried again. My son recently organized a film festival for young, local filmmakers that serendipitously took place inside my old church, so I seized the opportunity to explore and photograph it while he was in a meeting.

I was so excited to finally go inside after 40 years and was in my glory photographing my memories, including the brass banister on the stairs when you walk through the interior set of doors, the old choir room, the stained glass windows – all as I remembered them – and locating the various rooms, including the unassuming door in a corner that led to the Sunday School rooms down in the basement. 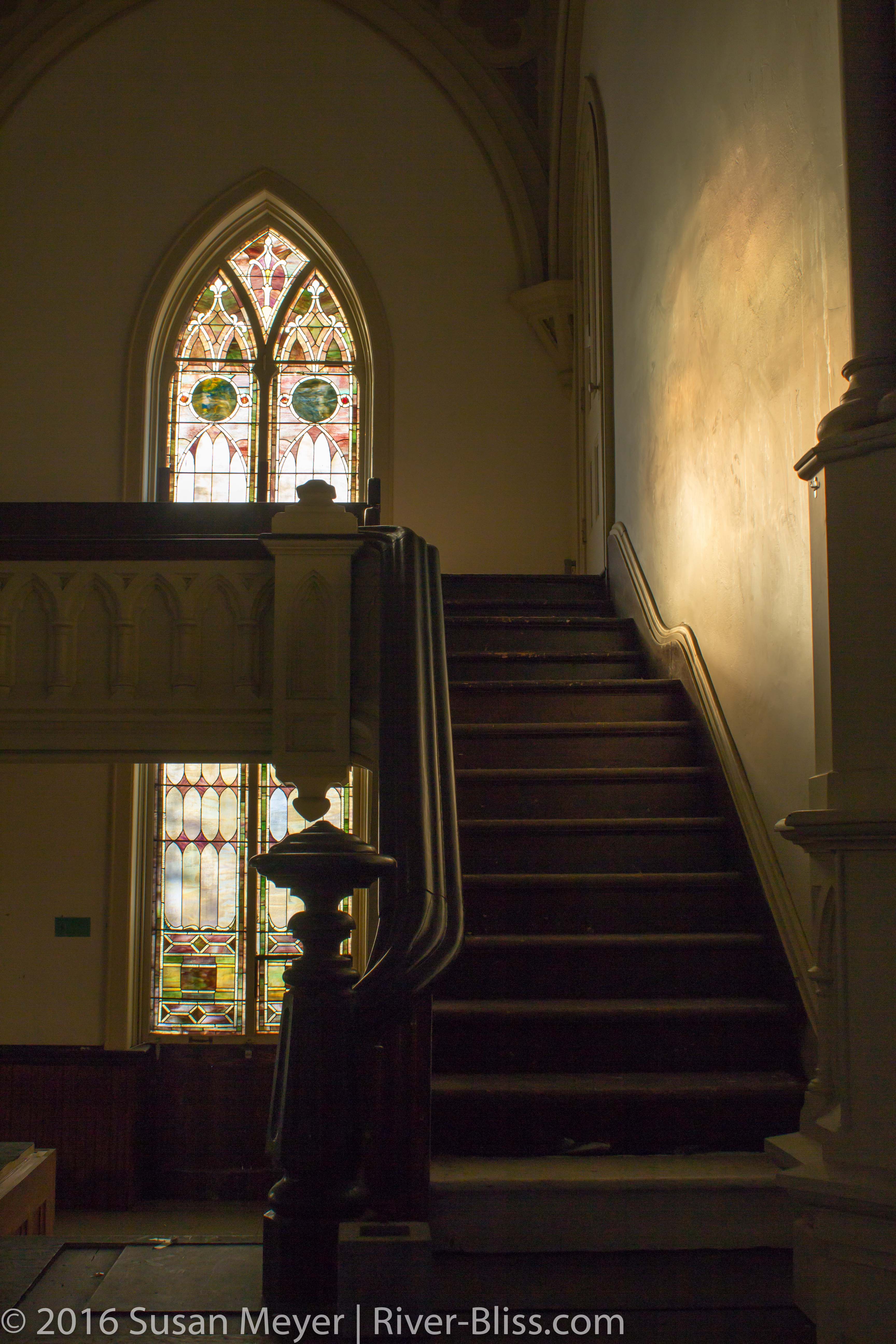 The space that was most radically different was the nave and sanctuary upstairs because all the pews had been removed, along with the entire chancel, including the resplendent pipes of the pipe organ. But it still smelled exactly the same. It was blissful to be alone in the former worship space as the late afternoon sun streamed in through the stained glass windows. 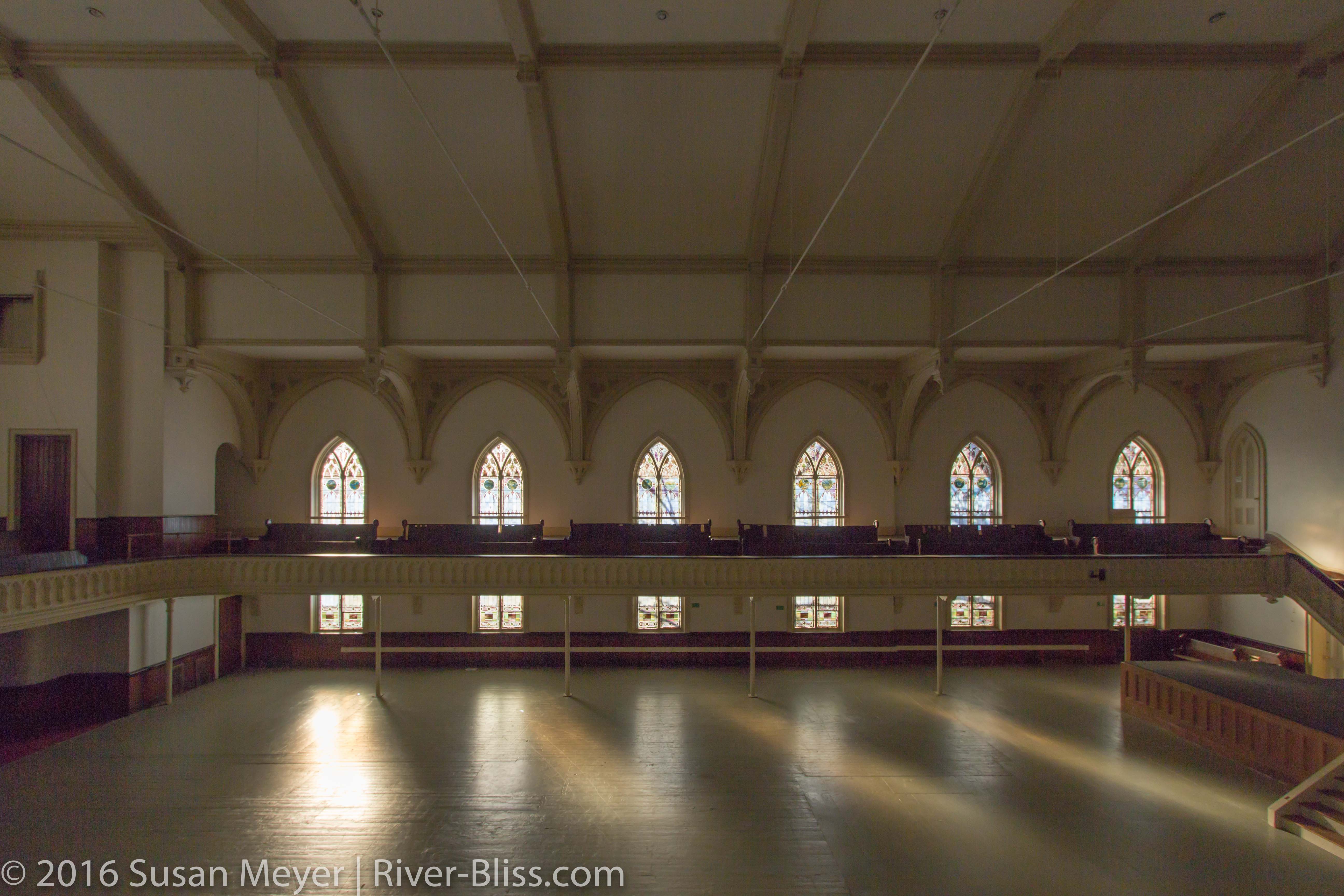 I’d never attended an event at the church after it was converted to a performance venue, but I tried to go inside once, and because the door was locked, I assumed it was generally inaccessible.

However, when I left the church at the end of my son’s meeting and the following day at the conclusion of the film festival, the door remained unlocked. People were coming in for dance classes and other events. It was an active venue with doors that were not always locked. 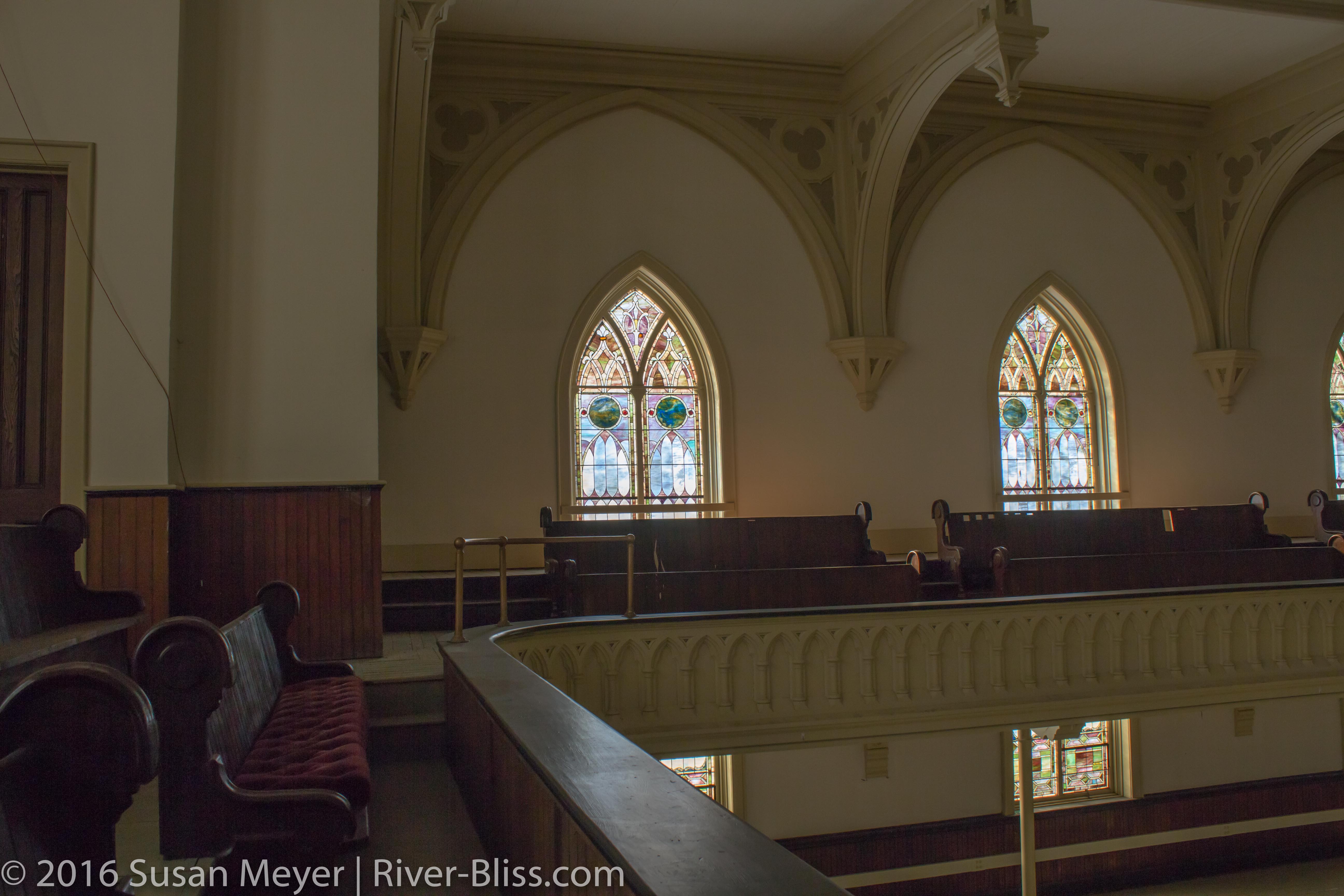 The reality is that I tried to open the door once, and it was locked. And then I didn’t try again. Is that a great metaphor or what? 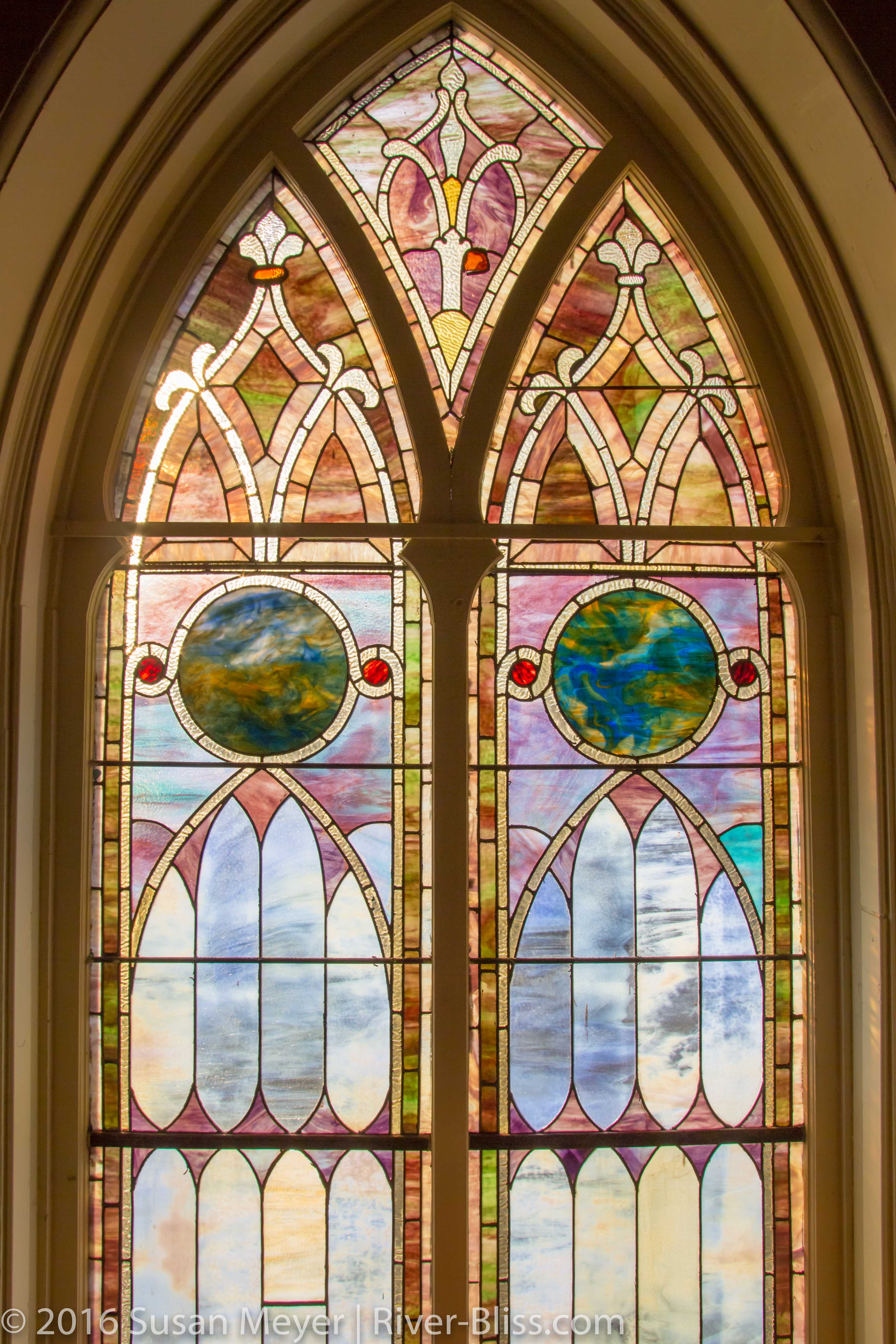 In recent months, I’ve been unearthing and releasing some deeply held beliefs and conditioning regarding money and entrepreneurship because it is time to make some changes rather than continue to repeat the same patterns that have not served me in the past. In the grand scheme of things, money is just another form of energy that shouldn’t be so weighty and intimidating. However, financial prosperity is something I have been passive about until now. It was a door I knocked on, but when nobody answered, I just moved on, believing it was locked and inaccessible, and I did not have permission to enter. 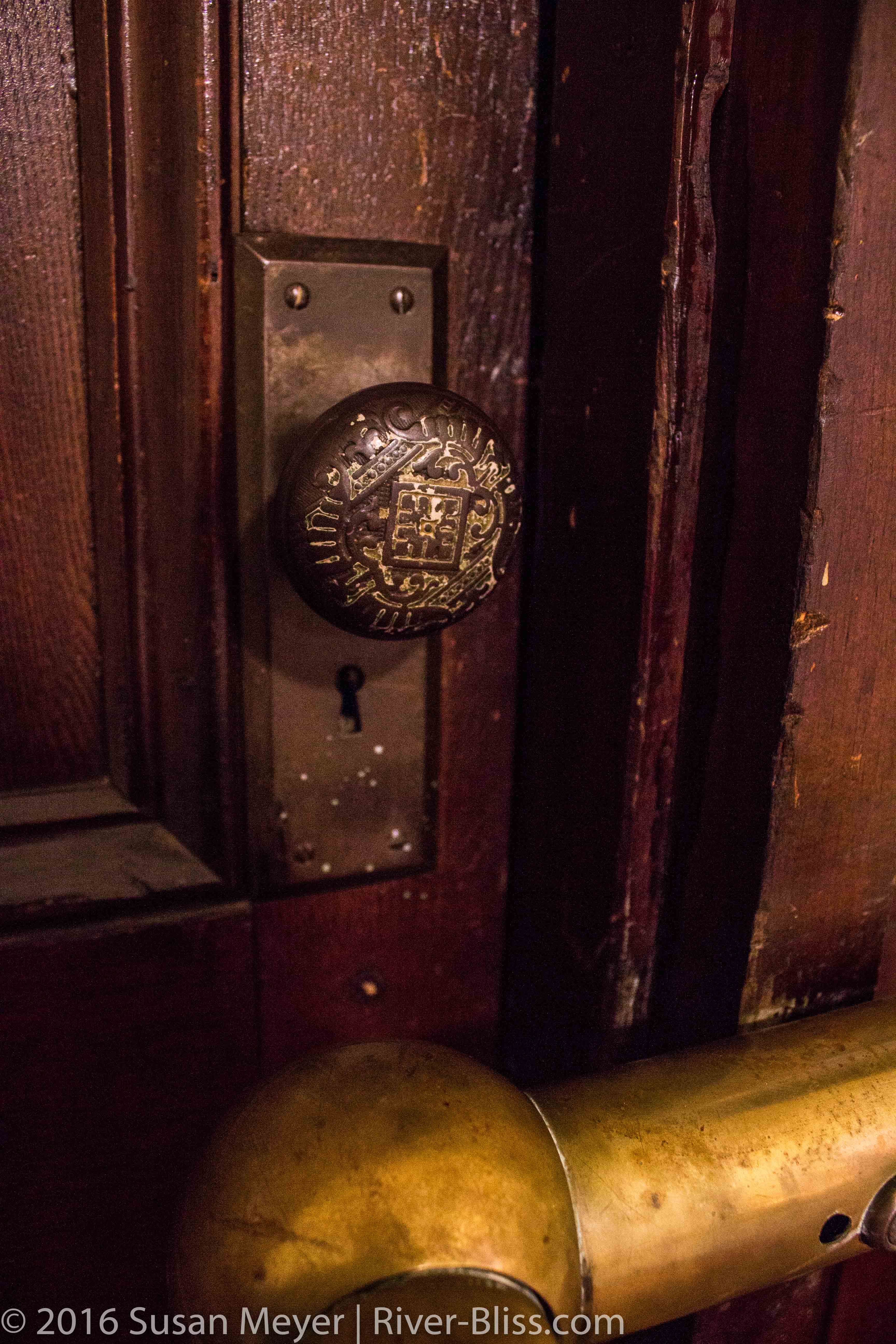 But now I have become curious. What if I were to find out at the end of my life that the door was unlocked the whole time, and I only assumed it was locked and lived my entire life as if that were the case – and never turned the doorknob? Or perhaps I tried just once and found it locked and assumed that was always the case, so why bother trying again? Well, there is a voice inside me now urging me to turn the doorknob and find out what’s inside the rooms I had considered off-limits. In other words, what is on the other side of fear?

That is the metaphor I take away from the church experience. Our circumstances aren’t what block us. Our assumptions about our circumstances and ourselves in relationship to them are what block us. What might we accomplish if we adjust our mindset and beliefs, become more adventurous, and empower ourselves to do something different this time – and actually turn the doorknob of the room we hadn’t felt worthy of entering in the past, instead of retreating to the familiar spaces?

It’s like failing to notice the waterfall on the street I once lived on because I never turned my head just a little more to one side. I can’t help but wonder: What are we missing out on by not doing something different? What kind of new shoots can we push up this year by challenging our assumptions and being a little more curious and adventurous? With nature as my mirror and guide, I believe it’s time to find out!