Although my mom is on my mind every single day, two days before Mother’s Day, I woke up thinking of my dad, whose presence I’ve felt quite a bit lately.

I’ve been staying on the Massachusetts North Shore for the past few days, and yesterday I visited Fort Sewall, a historic point of interest overlooking Marblehead Harbor. I hadn’t been to Fort Sewall in nearly three years and felt drawn there for some reason. Actually, a photographer I conversed with on the beach the previous night told me he shoots there a lot, so the seed was planted. 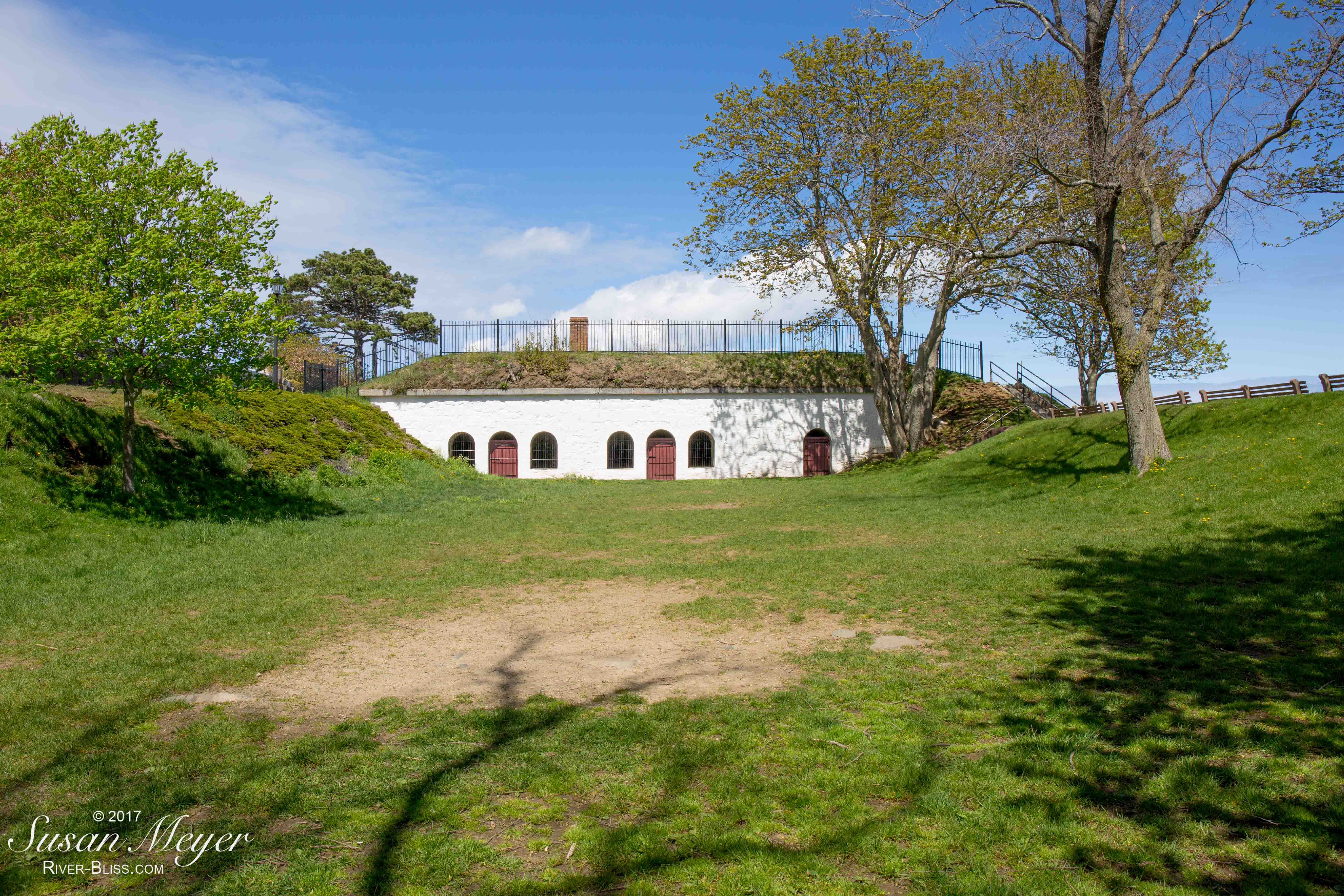 I entered the park a few steps in front of an elderly man who instantly reminded me of my dad. Perhaps it was something about his pace or energy. I guessed he was about the age my dad was when he died last fall. I stopped to photograph a picturesque view, walked a few more yards, then stopped to admire the view of the lighthouse across the harbor. That’s when the man approached me with a friendly greeting and started talking about how much he loves this place. He kept exclaiming, “I just love it here!” He said that he sometimes comes to this seaside park and sits on the bench for hours, and when he’s there, he doesn’t  have any thoughts in his head at all. Nothing bothers him. I replied that the richness of the sights, the sound of the waves crashing against the rocks, the refreshing breeze, and the smell of the sea take you out of your mind and your thoughts, and he agreed. 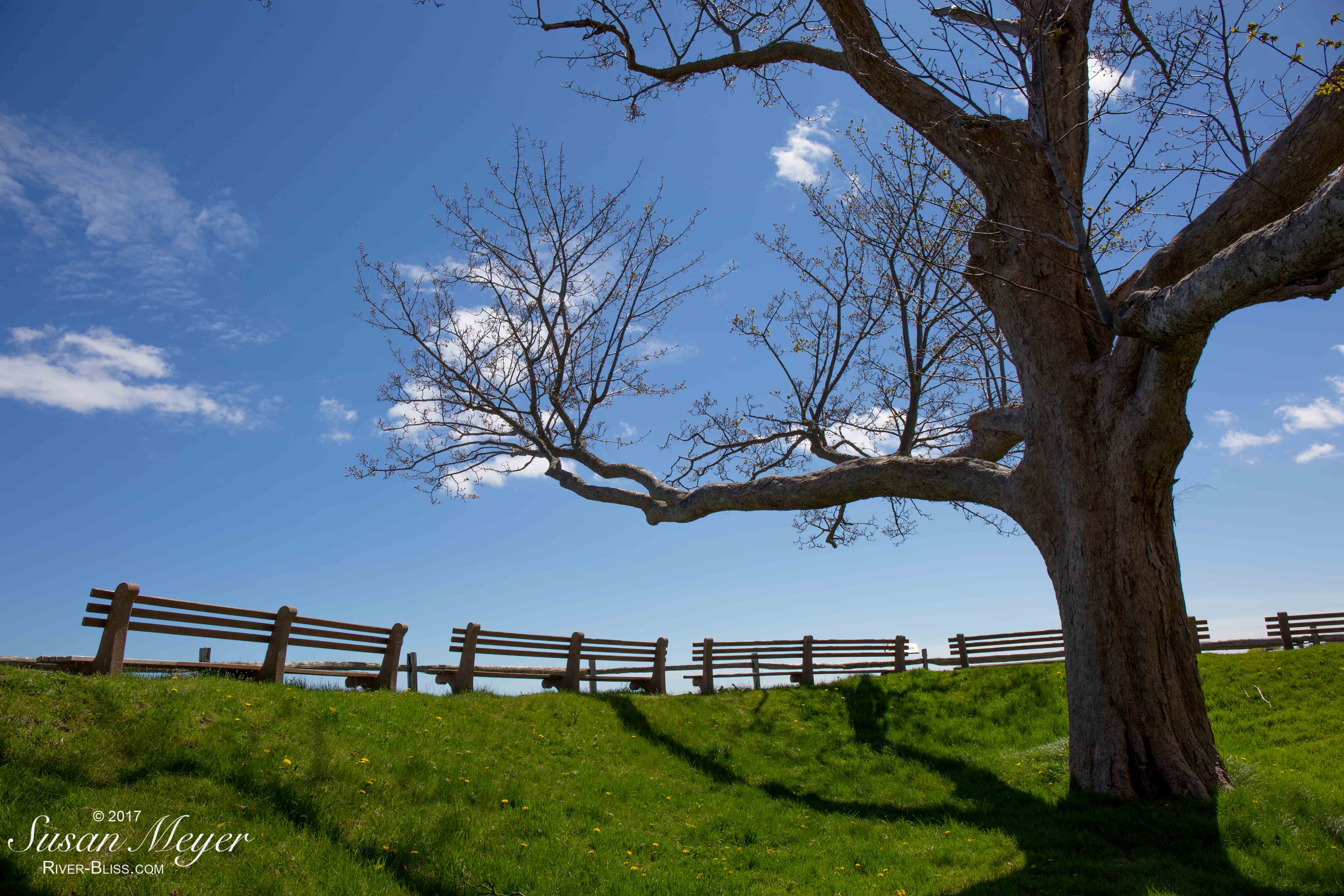 I noticed he was wearing a blue 2013 World Series jacket and wondered if the Red Sox were in the Series that year. Baseball was my dad’s great love, and the jacket reminded me of him. He was also wearing an Air Force baseball cap. We stood together in that spot for a good 45 minutes, sometimes for long moments of silence as we appreciated the fullness of the experience and all the sensory impressions. Again, he exclaimed, “I just love it here! It’s like heaven.” 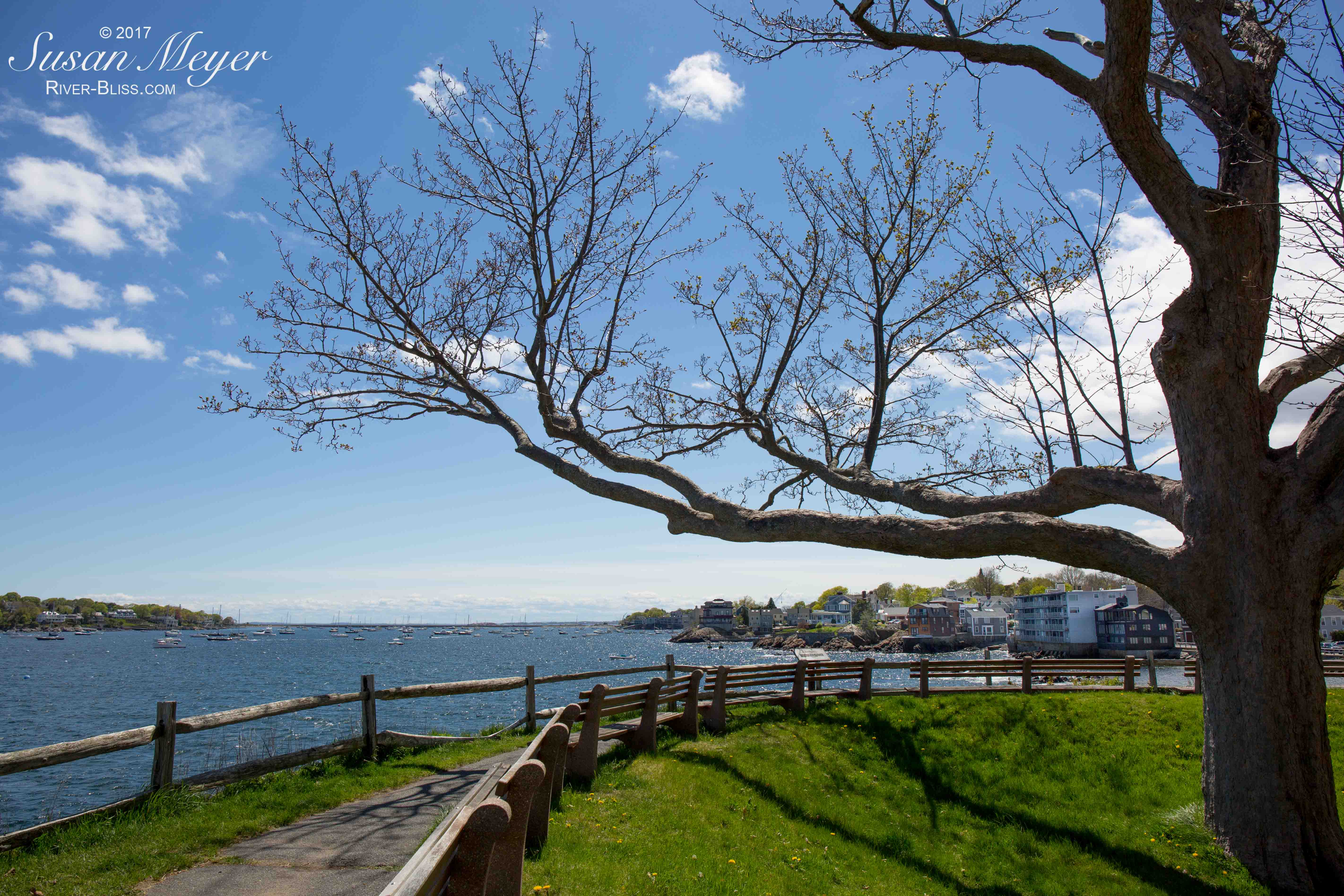 He talked about how he used to go out on a boat lobster diving and spent a lot of time on the water. One thing was sure: This man was in his personal paradise, and I appreciated being there with him. His joy intensified my own.

Eventually, I told him I should get going, and he asked if I wanted to see a picture of his “pride and joy.” Then he reached into his wallet and took out a picture of a bottle of Pride furniture wax next to a bottle of Joy dishwashing detergent. Not what I expected, I laughed and appreciated his sweet sense of humor. He told me he was at an 85th birthday party, and that joke was a big hit with the older ladies. I imagined him bringing a smile to many faces with his joke and found it lovable. Somehow, it reminded me of my dad’s sweetness and sense of humor.

I said goodbye about five times before we finally headed back toward our cars. We walked together out of the park, and I paused again to take a picture. He commented about what a nice camera I have, and I explained that my dad passed away in October, and I received some money that I used to upgrade my camera for my photography business. I explained that although I’d rather my dad were still around, I am grateful for the camera. 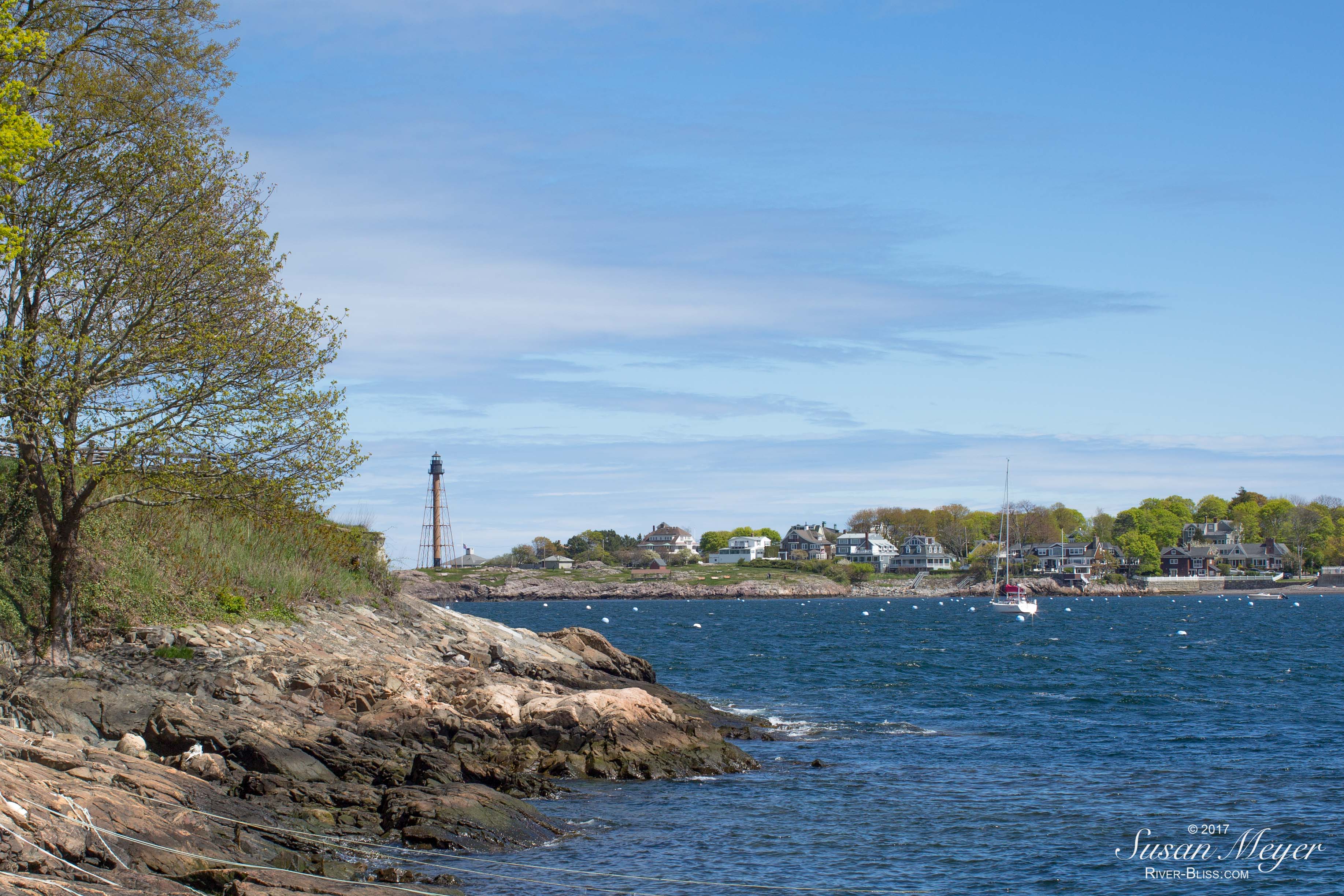 When we were nearly at the parking area, I stopped at a railing along the road to take a couple more pictures. To our right were some steps that went into the water, and he told me you can get fresh lobster right from the boat when it pulls up there. Before parting, we both said how good it was to see each other. As those words came out of my mouth, I realized it was odd to say “see” instead of  “meet”. And yet, we both did.

I drove away thinking of my dad and feeling grateful to have interacted with someone who reminded me of him.

When I got back to where I was staying, I Googled “2013 World Series” and confirmed that the Red Sox won the championship that year. That was my dad’s favorite team. Although you could expect a 2013 World Series jacket wouldn’t be uncommon in this neck of the woods 18 miles north of Boston, it was the first one I noticed.

This morning, I woke up thinking of my interaction with the elderly man – and his Air Force hat, in particular. I couldn’t remember: Was my dad in the Air Force? I pulled up his obituary online, and sure enough: He served in the Air Force reserve. At that moment, I felt that what I experienced wasn’t just a random interaction. It was a spiritual encounter. I connected with my dad’s essence through that friendly stranger.

About a year after my mom passed away, my dad and I were sitting in his car in the driveway, and before driving to wherever we were headed, he told me about a book he was reading that referenced some unexplained occurrences family members reported following the death of a loved one, who was a famous historic figure. Although my dad was not inclined toward the supernatural, he was excited to tell me about it. It seemed he found this particular account convincing. In general, I think he really wanted to believe and seemed visibly touched when I told him about different experiences I’d had after my mom – his beloved wife of 50 years – passed away. I sensed strongly that she was trying to communicate with him, but he wasn’t picking up the cosmic telephone because he didn’t hear it ring.

Within two minutes of pulling out of the driveway, we drove past the recreational field where my dad used to coach baseball, and we saw my mom pull out of the parking lot right in front of us, in her car! I exclaimed, “That’s Mom!”” He had seen her, too. But it was something that seemed at the same time completely matter-of-fact and too unbelievable to comprehend – the kind of thing that makes you cock your head and look perplexed, but then you return to what you were doing and perhaps convince yourself you didn’t actually see what you thought you did, only to wake up in the middle of the night or in a quiet moment thinking about it and realizing that you experienced something otherworldly.

I have come to believe that our loved ones never really leave us and communicate with us through many different disguises and messengers.

There is an elderly man who is a regular patron at the library where I work. He, too, reminds me of my dad. He is from the same era, presumably has similar attitudes and values, and I have a special place in my heart for him. One day, he fell asleep at a table and really reminded me of my dad, who fell asleep all the time when he was sitting down! I feel happy when I see this man. I am glad he is in this world.

One morning, I was at work, and this man popped into my mind along with something about a hospital. Later that morning, he came in the library, and although my prior interactions with him had been limited to smiling, waving, and wishing each other a nice day, this time he stopped to talk with me. He told me that he had been in the V.A. hospital all morning and that his doctor wanted him to have an operation that he didn’t want to have and is refusing to have it until he feels he really needs it. I’d had several conversations like that with my dad!

There’s one more time in the past week when I felt my dad’s presence. I recently decided it was time to buy a new bed because the hand-me-down bed I had been sleeping on wasn’t working for me. I looked online and found a really great, eco-friendly futon mattress and a beautiful oak frame for it. It was exactly what I wanted. Very zen.

After putting the bed together and making it up with new sheets, I was so happy because the bedroom looked and felt amazing. I couldn’t wait to sleep in it that night. I was in the kitchen and wished my parents were around to see how happy I was because I was able to use some of the money I inherited from them to buy a wonderful, new bed. I imagined my mom would be thrilled that I got something nice for myself. That’s what she always wanted for me! But I imagined my dad shaking his head and grimacing at the cost. I smiled, remembering what a penny-pincher he was.

Then I felt a very strong and clear sensation, as if someone were standing right behind me, followed by a prickly sensation in my lower back, as if l was being hugged around my waist. It was so strong and clear! I sensed it was one of my parents and got the feeling it was my dad and that he showed up to say that he approves and is happy for me.

My sister and I were texting a few days ago, and she said she hadn’t received any signs or felt our dad’s presence lately. That reminded me of what I experienced in the kitchen the night before. Experiences like that have become so commonplace that I sometimes forget to share them.

I don’t know how it works, but I’m grateful that it does.