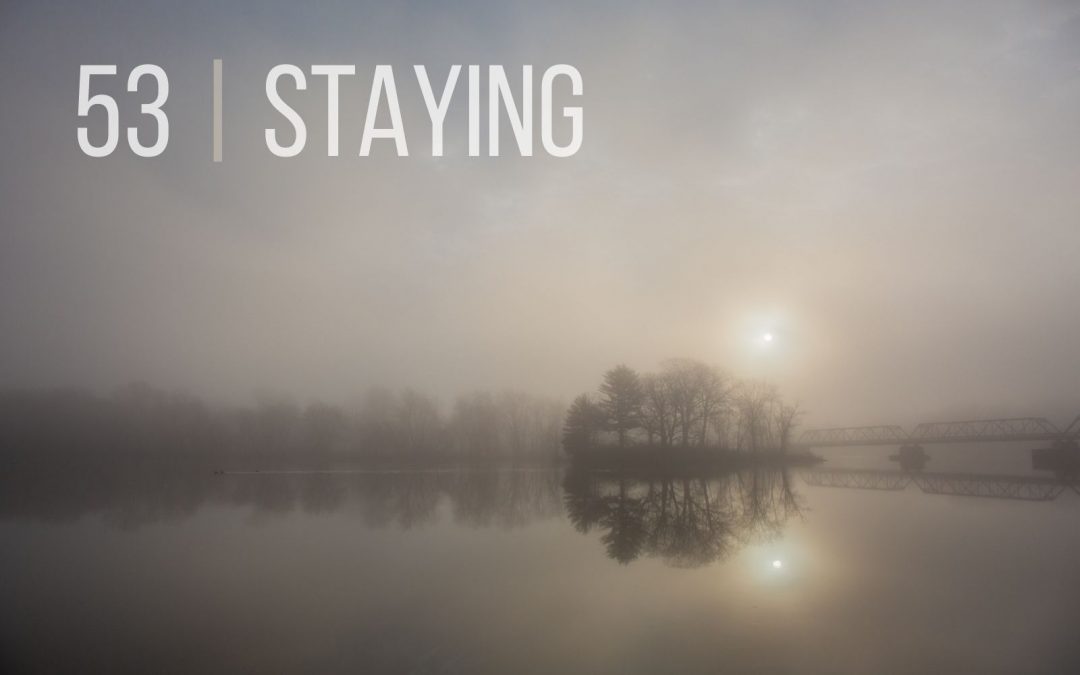 Staying. It’s a word that sums up what I’ve been practicing for the past year, both on and off the meditation cushion.

On the cushion: staying present to what is right here, including the challenging emotions that arise. Investigating a little deeper instead of resisting, fleeing, or fantasizing about being somewhere else.

Off the cushion, in daily life: staying close to home and exploring what’s right here. Taking a closer look. Sure, there were places I wanted to travel to. However, with everything going on, it felt more right to stay close to home.

I thought of it as an experiment. In lieu of traveling, I explored the natural areas around me: the river, local parks and hiking trails, and the town I live in.

What I’ve found by experimenting with staying is that it leads to great freedom and appreciation. What liberation is greater than the capacity to be content right where you are, with things as they are, right now, no matter what is going on? When you can access that, any goal, destination, or striving is just icing on the cake. You don’t rely on such things to provide a sense of fulfillment that is absent in the present moment. Happiness is here and now. And you can carry it with you into whatever you pursue and wherever you go.

I grew up in Saratoga Springs, a small city in Upstate New York that has received numerous national accolades. Slogans like “Saratoga: The Summer Place to Be” made it feel like the center of the universe! I went away for college and after graduating spent the next 12 years moving around. Naturally, as my worldview expanded, I considered how my hometown fit into it. During those years away, I adopted a stereotyped image of Saratoga Springs and swore I’d never move back. However, that changed when I was raising two young children.

I returned to the area 21 years ago, which allowed my children to grow up with extended family nearby. They were close to their grandparents and great-grandmother. I sought out kindred spirits and experienced Saratoga in a new way. And I stayed.

As I’ve discovered when my meditation practice has lapsed throughout the years, sometimes the value of getting away from something is eventually realizing what it contributes to your life. Then you can return in a more intentional way, with gratitude and a sense of this is part of who I am. Returning to Saratoga Springs as an adult gave me the freedom to perceive and interact with it in different ways.

For the past 12+ years, I’ve lived on the Hudson River less than ten miles from Saratoga Springs. When I was growing up, my family didn’t engage in nature-based activities or venture out this way. It’s hard to believe I lived so close to the river all those years and never experienced it. Living on the river, I appreciate being able to visit Saratoga Springs on my terms, with plenty of breathing room from the summer tourism.

The summer of 2020, however, was different than any other summer.

A Path Back Home

Aside from working at the library and filling up my water jugs at the State Seal Spring, I tended to avoid Saratoga Springs during the summer, when it was overrun with tourists, and it was notoriously difficult to find parking. However, during the summer of 2020, both the Saratoga Performing Arts Center and the racetrack were closed to the public, so there were far fewer tourists in town. Even with more locals flocking to the parks, it was quieter than usual.

It was an invitation to explore.

The uncertainty and groundlessness of the time drew me to sources of stability, which I found in nature: birdsong, flowers coming up on schedule as they do every year, the sound of spring peepers across the river, the nighttime sky, and so much more. Nature provided a variety of anchors that awakened me from the trance of thought and brought me back to the present moment many times a day.

The geographical landmarks from my childhood called to me in ways they hadn’t before. I made frequent visits to the Saratoga Spa State Park to investigate and appreciate more deeply the natural resources that had served as the backdrop of my childhood. During 2020, I spent a lot of time on the Vale of Springs trail, which I started to regard as “the path back home”. There was something deeply comforting about returning to what had been present in the background all my life and had drawn people to the area for centuries. It gave me a sense of stability in a time that felt so unstable.

At first, I was drawn to the Geyser Island Spouter, a mineral spring that over time created a large, stage-like tufa (mineral deposit). I sat meditating at the edge of the creek on the back side of the Island Spouter, and it felt wonderful there. I loved the sound of the water and the energy in the air. Locals often speak of lithium being in the air in that area. I don’t know why the energy there felt so good, but I kept returning.

One day, I showed up and saw several people on the tufa. A park docent was standing by, and I asked if there was a special event going on because I’d never seen people on the tufa. He said it wasn’t an event, and it was okay to go on it. That was the first time I photographed the spouter up close, and the lighting was incredible.

I went back a number of times, until eventually there was a sign saying the tufa was off-limits, to protect our natural resources. So instead of going on the tufa, I explored the sides of it from the creek: the different colors and textures. I examined and photographed practically every accessible inch of that tufa.

I was intrigued by how the mineral water transforms whatever it comes in contact with – whether rock, leaves, or people. In this spirit, I explored the other mineral springs in the park. I was introduced to the Tallulah Spring during a photography session with Hannah, a kindred spirit around my daughter’s age. I’d never noticed Tallulah before because she’s a little more tucked in. While wandering through the woods trying to find Hannah and Tallulah, I heard the sound of bagpipes in the distance, which felt otherworldly. Tallulah has since become my favorite spring.

I had been unsure about the direction I wanted to take with my “people” photography, and after photographing Hannah around the mineral springs that day, I became passionate about photographing women in harmony and spiritual connection with nature. That’s how my Women of Light photography began, with Hannah at Tallulah after hearing the sound of bagpipes in the woods. 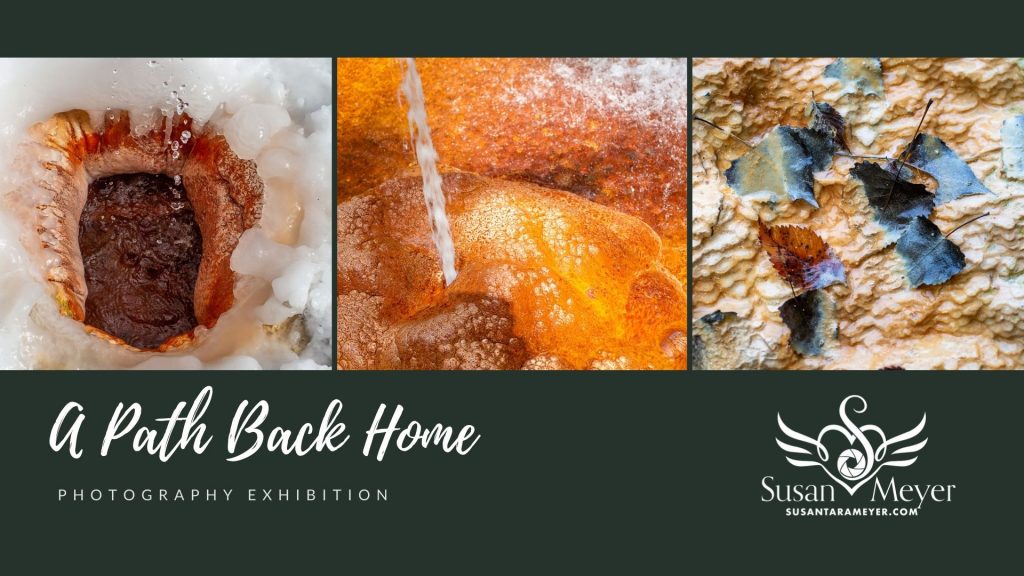 2020 put me on a path back home both literally and metaphorically…to the natural treasures of my hometown and to my truest, most awake self.

Through the practice of staying and simplifying, 2020 was a year that changed the trajectory of my life. It was a year of being nurtured by nature and having the breathing room to discover a true sense of life purpose – and shift into LIVING it. Out of presence and stillness, I discovered what was most important and was drawn to the situations and people that resonated most.

I was nurtured by: walking the labyrinth in the park down the road, kayaking on the river in front of my house, exploring local parks and nature trails with my granddaughter, taking walks with my husband, photographing women in harmony with nature, and connecting with networks of kindred spirits.

I also fell more deeply in love with flowers, ferns, water lilies, herons, the way trees on the riverside appeared to be circulating light, sparkles of sunlight on the river, willows and birches, misty sunrises, the freezing river, and the swan on the river.

I needed to honor all this artistically.

At the end of 2020, I intended to create a video of my favorite images from the year. At one point, I selected the images for it. However, my plate was very full, and before I knew it, February was nearly over. Perhaps that ship had sailed.

However, a few days before my March 1st birthday, an idea seized me: Why not create a visual meditation of the images that awakened my heart the year I was 53, from March 2020 through February 2021? So that’s what I did. I created two versions: one with images and background music and another that includes me reading poetry I wrote during that time period.

Staying and allowing has been an amazing practice. The two greatest resources that helped me through the turbulence of 2020 were my meditation practice and spending time in nature close to home: two different ways of staying. Both were invitations to return again to what is right here and become more intimate with it. To discover and deepen the pathway back home to what is most abiding and nourishing. To stay instead of run away into distractions, for everything that arises within us and around us is a portal for awakening.

I invite you to watch the video here:

Note: The words in this version express my truth while navigating all the unfamiliar situations and challenges of 2020. If the words do not resonate with you, you might prefer the wordless version.

© 2021 Susan Meyer. All rights reserved. You are welcome to share this post or excerpts of it as long as you give proper credit to Susan Meyer and SusanTaraMeyer.com. Susan Meyer is a photographer, writer, and spiritual teacher who lives on the Hudson River in Upstate New York.