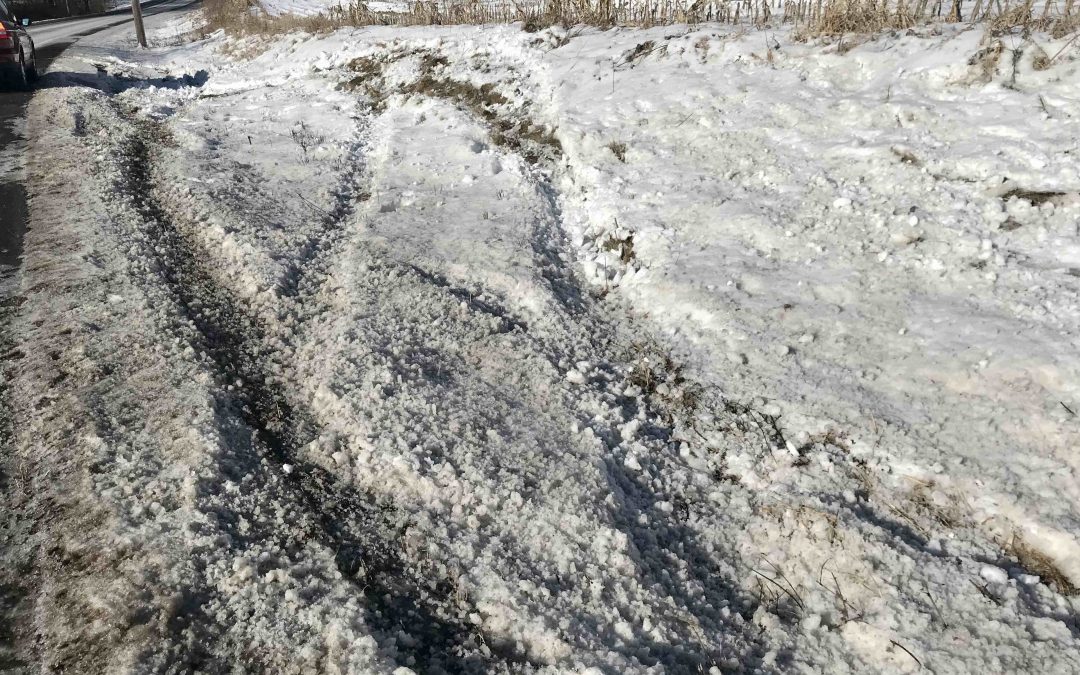 Last month, my twentysomething son was out driving at night on a country road close to home and hit a patch of black ice. He experienced the out-of-control donut movement before taking a wild ride through the ditch. After what he described, I assumed he was stuck in the ditch and was surprised when he told me he was continuing his errands. Especially because he said part of the front of the car was missing.

So this happened at night. He eventually came home, and since it was dark, we decided to take a look in the morning and deal with it then. Of course, I went to bed that night grateful there were no other cars on the road when he spun out, and to still have a son to say goodnight to.

In the morning, my husband came into the house from outside and asked if my son realized his rear license plate was missing. That was news to me and also to my son. My husband couldn’t believe he didn’t get pulled over for a missing license plate – especially when my son said there was a police car right behind him at one point during his travels.

We all went outside and took inventory of the car. Sure enough, a piece was missing from the front driver’s side, and the rear license plate was missing, too.

What to do first? Look for the license plate.

The two of us took a drive in my car to where he went off the road and looked for missing parts. We found the front piece but not the license plate. We also found another set of tracks through the ditch that looked like it had been an even wilder ride. A friend of mine also had an accident in roughly that spot a few years ago involving black ice.

My son’s tracks came within a yard or two of a telephone pole. While we were taking in the tracks and looking for parts, several cars went by. I was grateful all over again for the outcome being much better than it might have been. I think he was, too.

We drove up and down the road a couple of times in case the license plate didn’t fall off in the ditch. Maybe it was dangling and fell off after he was back on the road. But we didn’t see it anywhere. Did someone take it? Maybe the police?

Back home, we kept looking at the car and the empty spot where the license plate used to be, wondering what had happened to it. Maybe someone brought it to the Department of Motor Vehicles?

There were two things that needed to be done. We needed to have a mechanic survey the damage, and we needed to turn in the one (somewhat mangled) license plate and re-register the car with new plates. After some consideration, we decided to visit the mechanic first.

My son drove the car to the mechanic and stayed as the car was put on the lift and slowly raised above his head. As the car was lifting up, my son was surprised to discover the license plate was still there! It had been there all along! It wasn’t covered by snow or mud. It was there in clear view!

He texted me a picture of the car with rear license plate intact, and I was astonished. How could it be? All three of us didn’t see that license plate. My husband was the first to notice, and after he shared the news with us, we weren’t able to see the license plate that was right there in front of us. The license plate only became visible to my son when he saw the car literally from a different perspective, and the license plate was at eye level.

The power of suggestion! It blew my mind.

My husband explained that he was looking for the license plate lower than where it was, and that’s why he didn’t see it. It reminded me of something I experienced with my dad many years ago.

When my parents were alive, they had a ring-toss board from my dad’s childhood on the wall in the family room. They kept their keys on the hooks on that board. One time I was visiting, and my dad was frustrated because he couldn’t find his car key. He was looking all over the house for it. He told me what the key looked like, and I started looking for it, too. I looked at the ring-toss board and found a key that fit the description. The problem was that it was on a different hook than he normally kept it on – I think the next hook over. Because he expected it to be on a specific hook, he didn’t see it on another one. Focused narrowly on that one hook, he couldn’t see the rest of the board.

That brings to mind a Sufi story of the holy jester, Mulla Nasrudin. Someone was walking home one night and found Nasrudin on all fours searching frantically for something under a streetlamp. The passerby asked what he was looking for. He said was looking for his key. The passerby helped him search for it. Eventually, he asked Nasrudin if he had a sense of where he might have dropped the key, and he answered that he lost it inside his house. The passerby wanted to know why, then, he was looking outside for something he lost inside his house. “Because there’s more light out here under the streetlamp,” he replied matter-of-factly.

Kind of a tangent, kind of not. How often do we look outside of ourselves for the answers we’re trying to find and believe what others tell us because it’s easier than searching within ourselves?

After the license plate incident, I wondered what else I’m not able to see due to the power of suggestion. What else have I or am I regarding as truth because someone else declared it to be so, and then I couldn’t see otherwise? We get these ideas in our heads, and then they bias our perception. We see the world through the lens of what we believe to be true. And the three of us couldn’t see a license plate that was right there the whole time. Then came the moment when our eyes were more fully open, and we marveled at how we couldn’t see it before.

Happens to me all the time in nature. All of a sudden, something that’s been there all along will catch my attention, and I’ll see it for the first time.

So I’ve been chewing on this ever since, holding my “truths” a little more lightly and bringing an attitude of curiosity. Is there any other way to see this (whatever it is)? It is possible that I’m not seeing the whole picture? That I’m fixating attention in the wrong place?

I do still have my opinions and beliefs. But I’m also willing to be wrong or not completely right. To not judge others who hold conflicting opinions. To be curious about their views. To have as my compass what feels right and peaceful when I dive below the layers of ego to a deeper, more encompassing state of being. Which is why I meditate. Sometimes turning attention inward and sitting quietly with yourself helps you to  find that lost key – or license plate, as the case may be.

© 2022 Susan Meyer. All rights reserved. You are welcome to share this post or excerpts of it as long as you give proper credit to Susan Meyer and SusanTaraMeyer.com. Susan Meyer is a photographer, writer, and spiritual teacher who lives on the Hudson River in Upstate New York.