The Story of Patrick Cottonwood 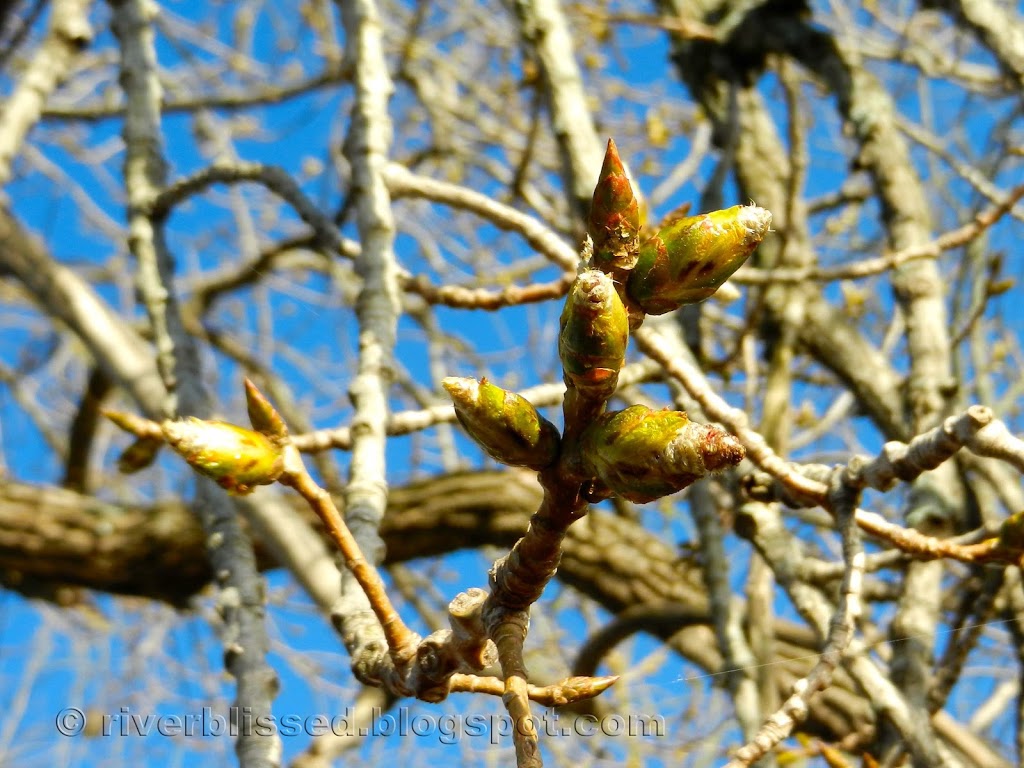 This year, I have spent much time observing the Eastern Cottonwood trees on the riverside and have fallen in love with them. They have amazing energy and a fascinating life cycle, and I want to share their story with you. Recently, I learned that cottonwood trees are sacred to the Lakota people and are central to the Lakota Sundance ceremonies. I experience cottonwood energy as quite powerful and therefore was not at all surprised to learn of the cottonwood’s significance to the Lakota.

Spring came early this year, and I was able to start kayaking in March, which was unprecedented. I took a lot of photos of trees along the shore, to share images of tree life cycles with my students on our SMART Board. Actually, I was quite blown away by noticing that leaves in spring begin with colors quite similar to the colors of autumn. (How can it be that it took nearly half a century for me to notice or remember this?) I photographed maple, oak, and willow trees and a mystery tree that took a while to identify. The mystery tree turned out to be an Eastern Cottonwood. 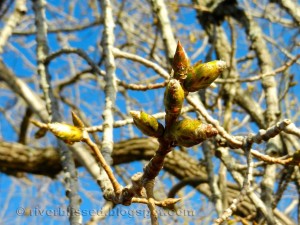 The buds continued to grow 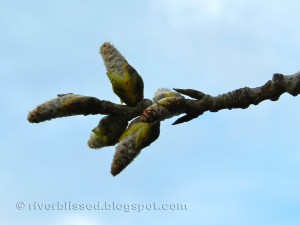 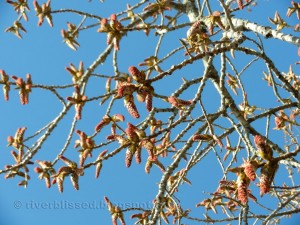 When I showed my kindergartners the photo below, they loved the “starfish” and began calling it the “Patrick tree,” after a starfish character in the SpongeBob cartoon. After seeing this picture, they made a habit of asking if I had more pictures of the Patrick tree. Naming the tree was a very important development, which came entirely from the children. Once the tree had a name, it seemed to come alive and become interesting to them. Even I began to think of Patrick as a personality and wanted to learn more about him. 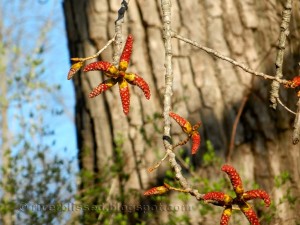 I still didn’t know what kind of tree Patrick was but continued to photograph his changes. Next, the catkins developed –  drooping strands of tiny flowers. 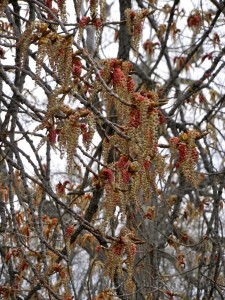 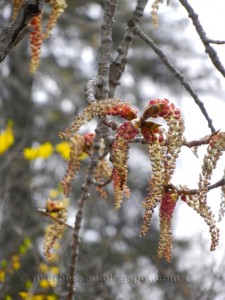 Eventually, tiny leaves came out and began to unroll. 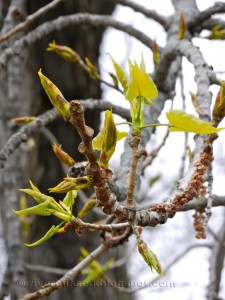 The leaves continued to grow, appearing shiny and waxy at first. 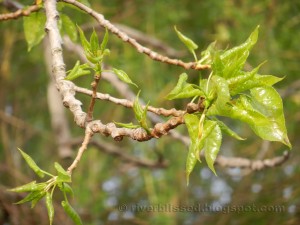 At this point, I had become downright intrigued with the “Patrick” tree, did some research, and was able to identify him as a cottonwood. The next day, I went to school, excited to tell the children that I learned Patrick’s last name. He has been “Patrick Cottonwood” ever since, and I just love that name!

Patrick Cottonwood’s leaves continued to grow in size and deepen in color, losing their waxy sheen. 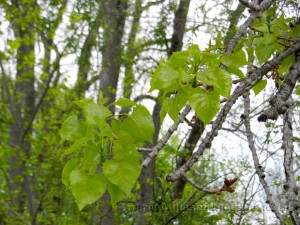 I have read in multiple sources that one of the reasons why the cottonwood tree is considered sacred is because its leaves provided a pattern for the tipi. According to The Cottonwood Tree: An American Champion by Kathleen Cain, Lakota (Sioux) holy man, Black Elk, explained that children began making little play houses from cottonwood leaves, which inspired the elders to construct tipis. In addition, if an upper branch of a cottonwood tree is cut, the cross-section reveals a five-pointed star (which seems to explain the five-pointed starfish pattern of the buds). 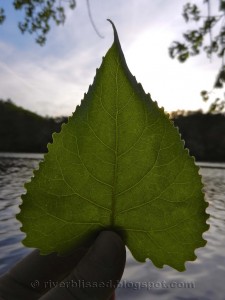 I read that cottonwood trees are either male or female, and that the name “cottonwood” derives from the appearance of the female cottonwood tree in fruit stage. I was eager to see which cottonwood trees would go through this stage in late spring. Patrick didn’t, which meant he was, indeed, male. But here is a photo of a tree across the river from Patrick producing green fruits that contain cottony seed clusters quite similar to milkweed. The children named this tree “Fluffy.” 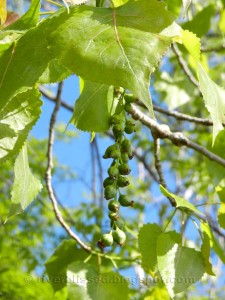 I explained to the children that Fluffy was Patrick’s girlfriend, and he sent gifts (pollen) to her through the wind, and then she would reciprocate by becoming cottony and releasing cottony seed fairy babies into the air when the little fruits opened. Patrick and Fluffy love to give each other gifts! 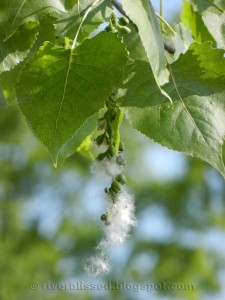 On windy days in late spring, I enjoyed stopping to float near the cottonwoods and watch the seed fairies fly into the wind. (Fortunately, I seem to have outgrown my pollen allergy.) 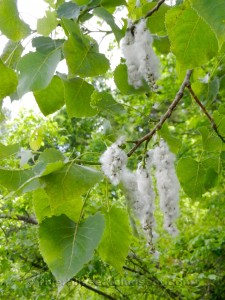 Here (below) is Patrick, living peacefully on the riverside. Cottonwoods are similar to aspens in that their leaves quiver and rustle in the wind. When I approach Patrick Cottonwood by kayak, he is an endearing sight because it looks like his heart-shaped leaves are waving hello and beckoning me to pay him a visit – which I do. I rest for a while beneath his canopy of leaves. This is one of my peaceful places where I bring my questions and often find answers. Patrick teaches me a great deal about patience. 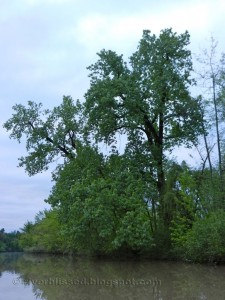 Patrick looks pretty much the same throughout the summer. 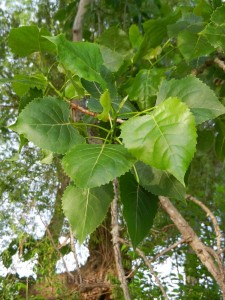 But now, on the first day of autumn, his leaves have begun to turn gold, much like human hair turns gray with age and wisdom. 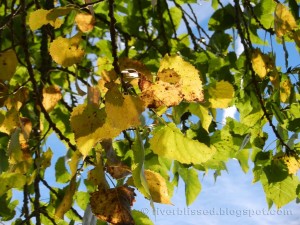 Soon he will be completely golden and then will release his leaves throughout October until a late October breeze comes along and leaves him bare. And then he will take a long nap. When he awakens, the fascinating process will begin again – one big circle that includes a time for rest. As I watched what seemed like millions of cottonwood seeds floating on the river back in late spring, I wondered where the new generation of cottonwoods would make their home. Only time will tell.
*    *    *    *    *    *    *    *