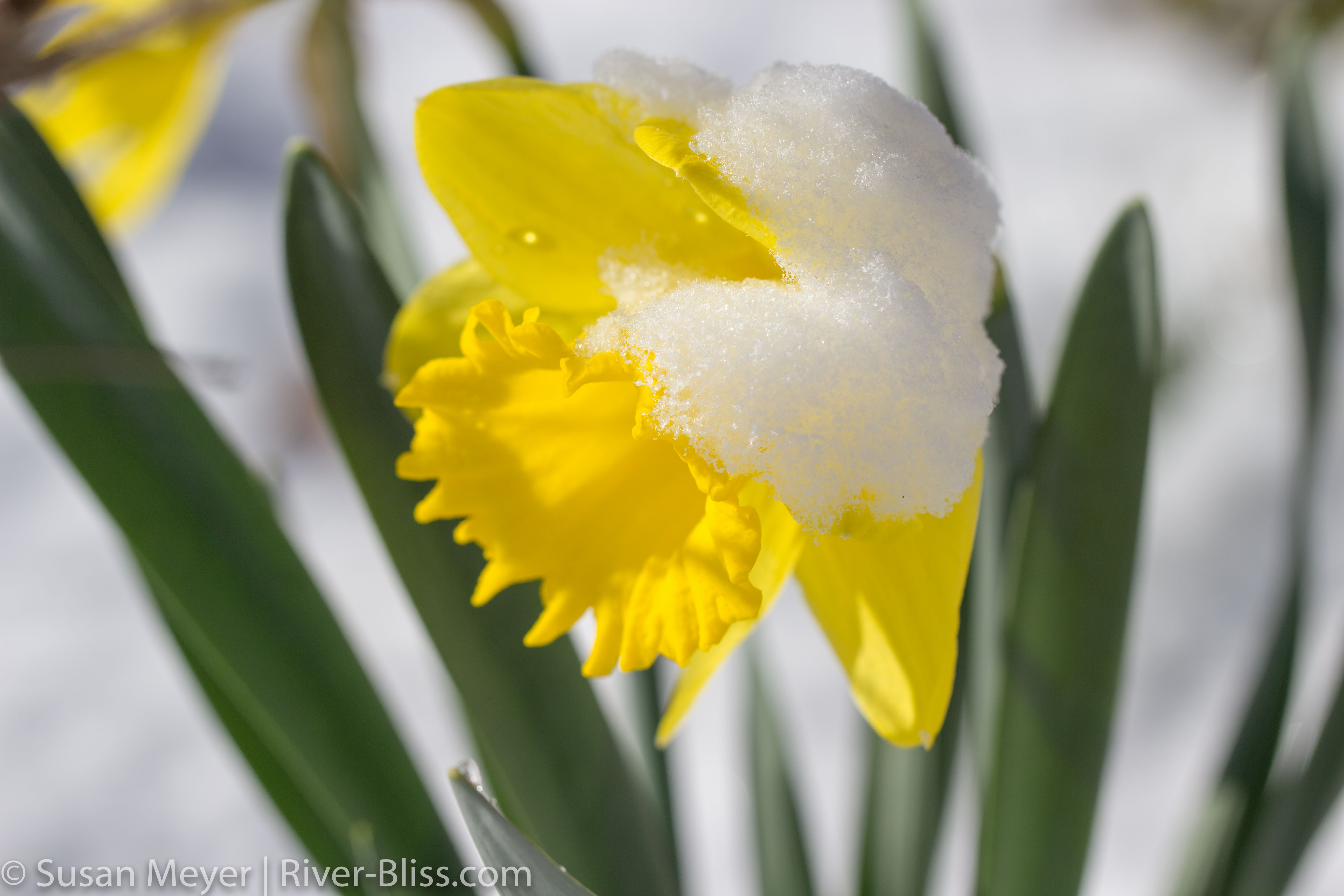 When I opened my eyes this morning, I was surprised to find the landscape covered with snow. I’d heard talk of snow in the forecast for this weekend but never checked the forecast for myself – and after yesterday’s warmth, chalked it up to an April Fool’s joke. But sure enough, the ground and the trees were white.

I sprung out of bed with my sights set on the daffodils I’d photographed yesterday in the park. It felt Really Important to photograph daffodils blooming in the snow, although I didn’t know why. I have learned to trust that feeling and didn’t waste a moment getting to the park. 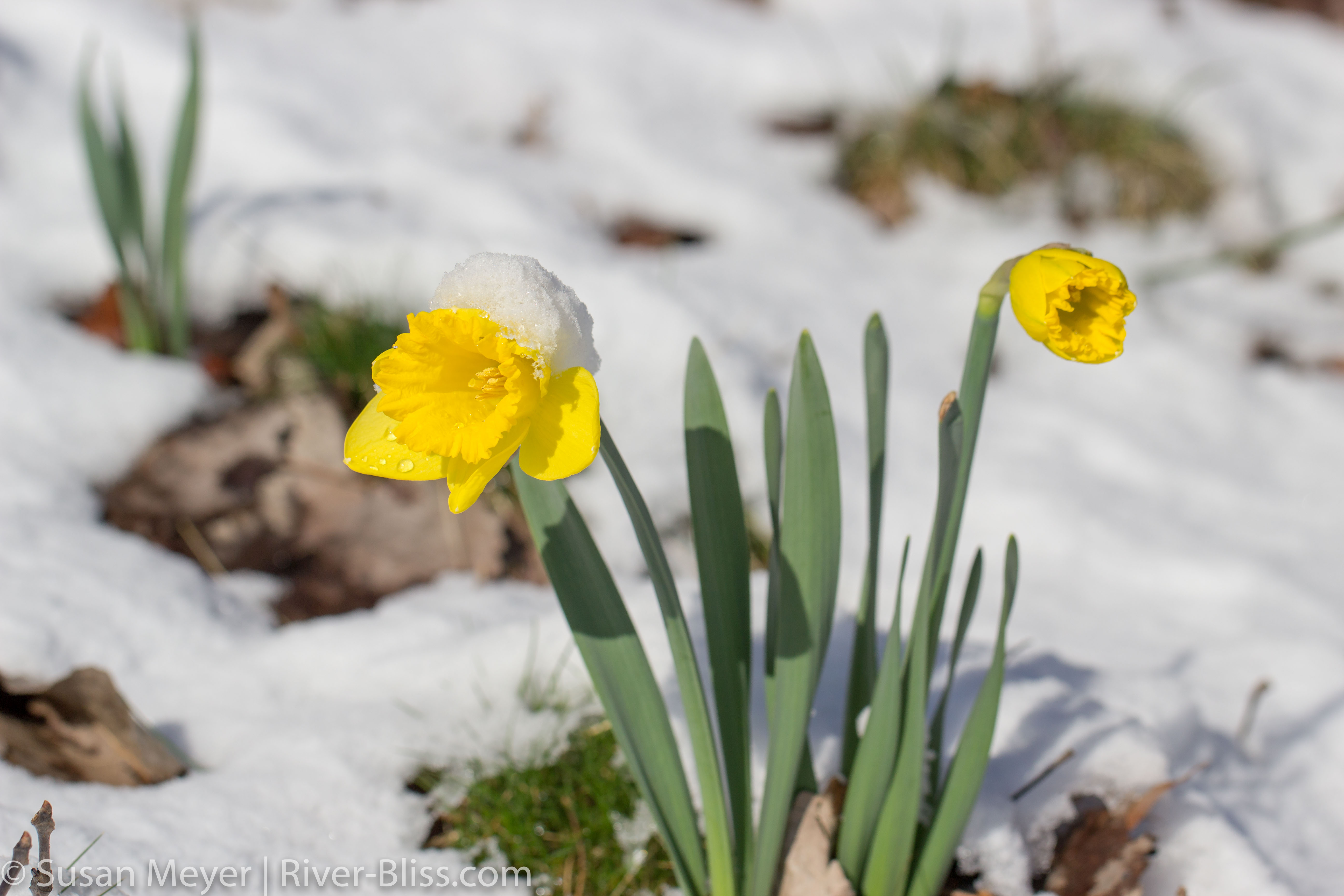 As I spent time connecting with the snow-covered daffodils, it dawned on me why it was so important to photograph them. They carried a message of hope that seemed relevant to challenging times in general, and to my daughter’s current situation, in particular.

Some daffodils were fully bloomed. Others were working on opening up more. Some were still closed, with tips swollen and yellow. Most had some snow on them, and some were more weighed down than others by snow. The message that came through is: Don’t give up because you wake up one morning and find yourself weighed down by a clump of snow on your back. It’s not going to last. The snow that is weighing you down at this moment is temporary. It will melt. In the meantime, keep your face to the sun. 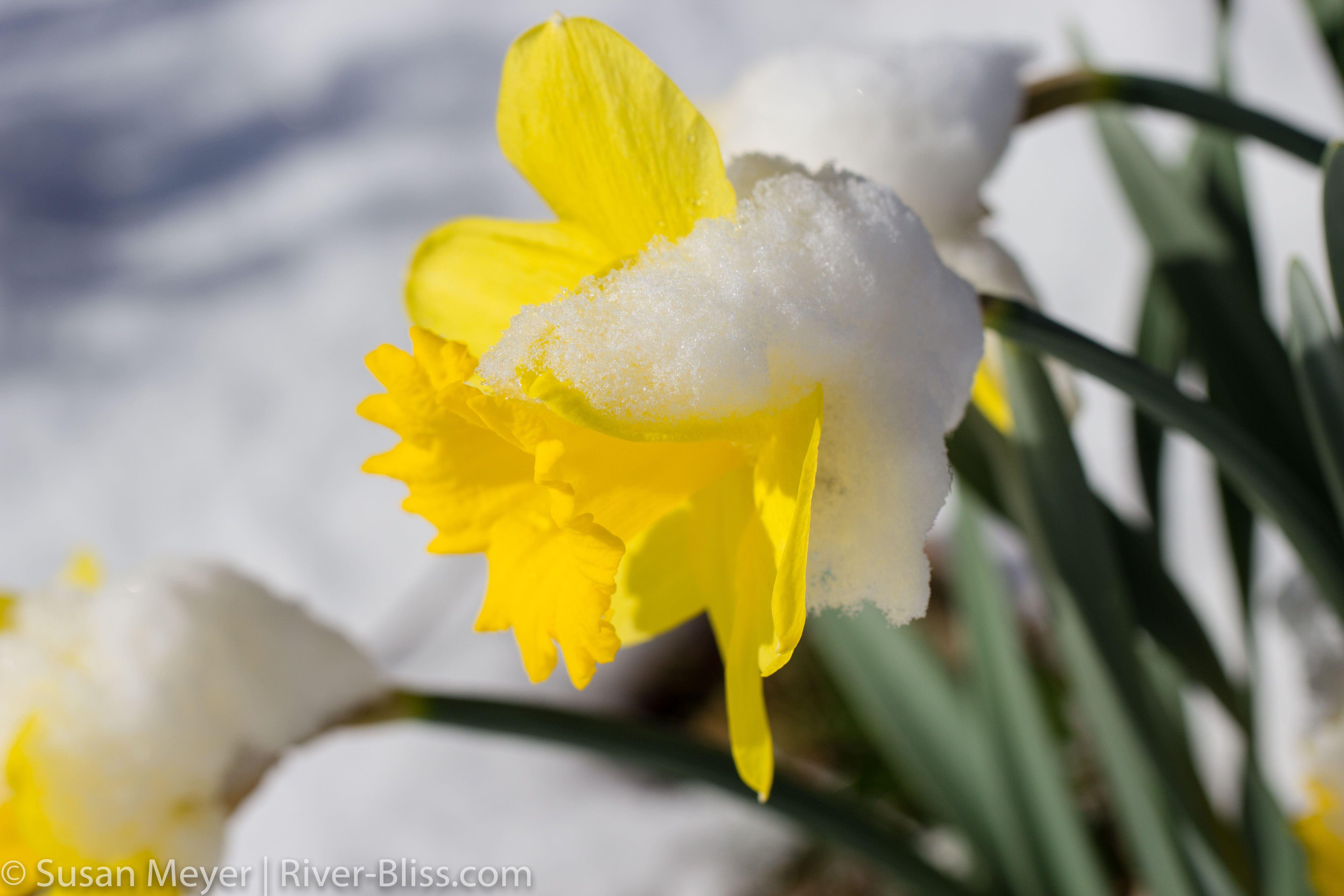 I photographed one daffodil that had what looked like a petal of snow hanging from it. 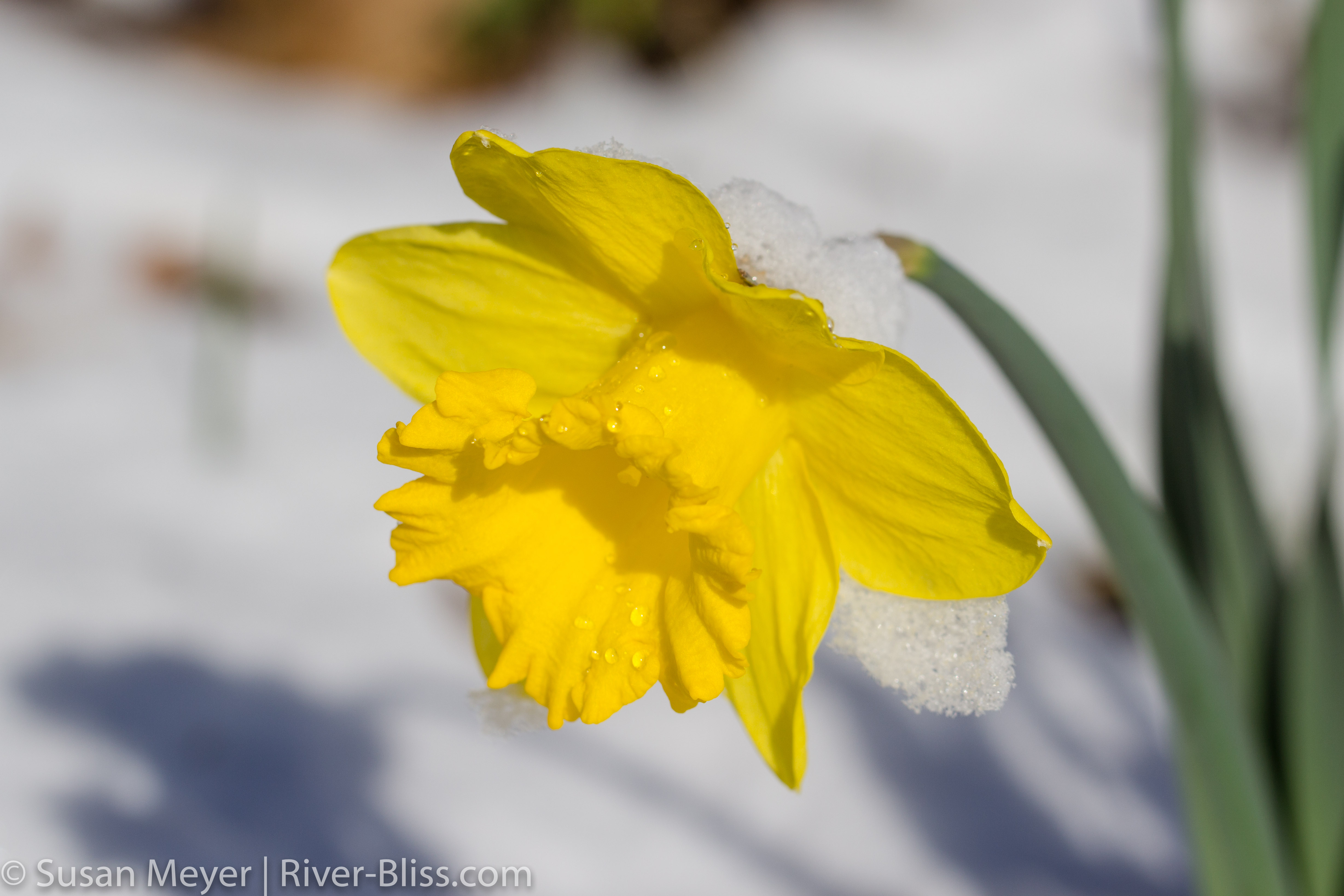 The instant after I snapped the picture, a small twig broke free from being tangled up with other twigs and smacked the snow petal off of the daffodil. Just like that, the snow was gone.

Several minutes later, a gust of wind came along and blew the snow off some of the other daffodils.

Meanwhile, the sun was rising in the sky and becoming warmer and would melt the rest of the snow in time. But you might not even have to wait for the warmth of the sun to melt the snow from your petals because the wind or a twig – or even a person or animal passing by – might come along and remove your burden in an instant. Your situation can change in a heartbeat. New information, possibilities, and answers have been known to fall from the sky. Be aware and receptive. 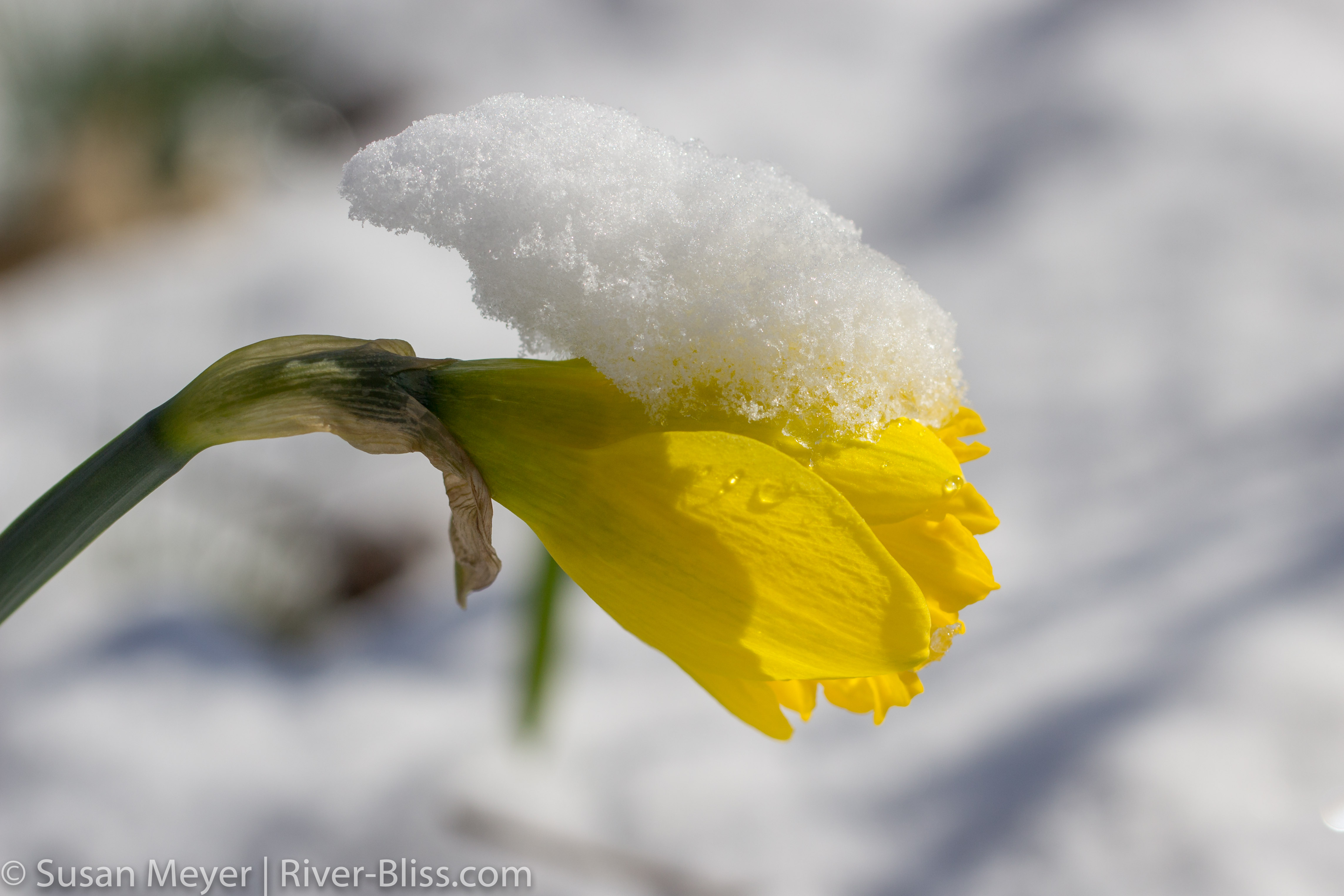 As these associations came through the snow-covered daffodils, I spoke them into my voice recorder. I thought of my daughter and felt eager to share my daffodil insights with her, even though I realized it might be one of those “you had to be there” instances that wouldn’t transmit as powerfully as it was experienced. As I was recording, I looked up, and a woman appeared walking on the path hand-in-hand with a very young girl. They were heading in my direction, and I guessed the little girl was younger than two years old. The pair instantly brought to mind my daughter and infant granddaughter. They also brought tears to my eyes because it felt like a serendipitous occurrence. I sensed the Universe was both reinforcing my insights and assuring me that my daughter and granddaughter would be okay by showing me this woman and very young girl walking peacefully along the path.

It turned out they were the only people I saw the whole time I was at the park.

Keep blooming. Don’t become discouraged. We have no idea how quickly circumstances – like the weather – can change. Yesterday, it was sunny and warm. This morning, the ground is covered with snow. But it will be gone soon. Don’t give up, even when the cold stings your back, and the weight of it all pushes you down. 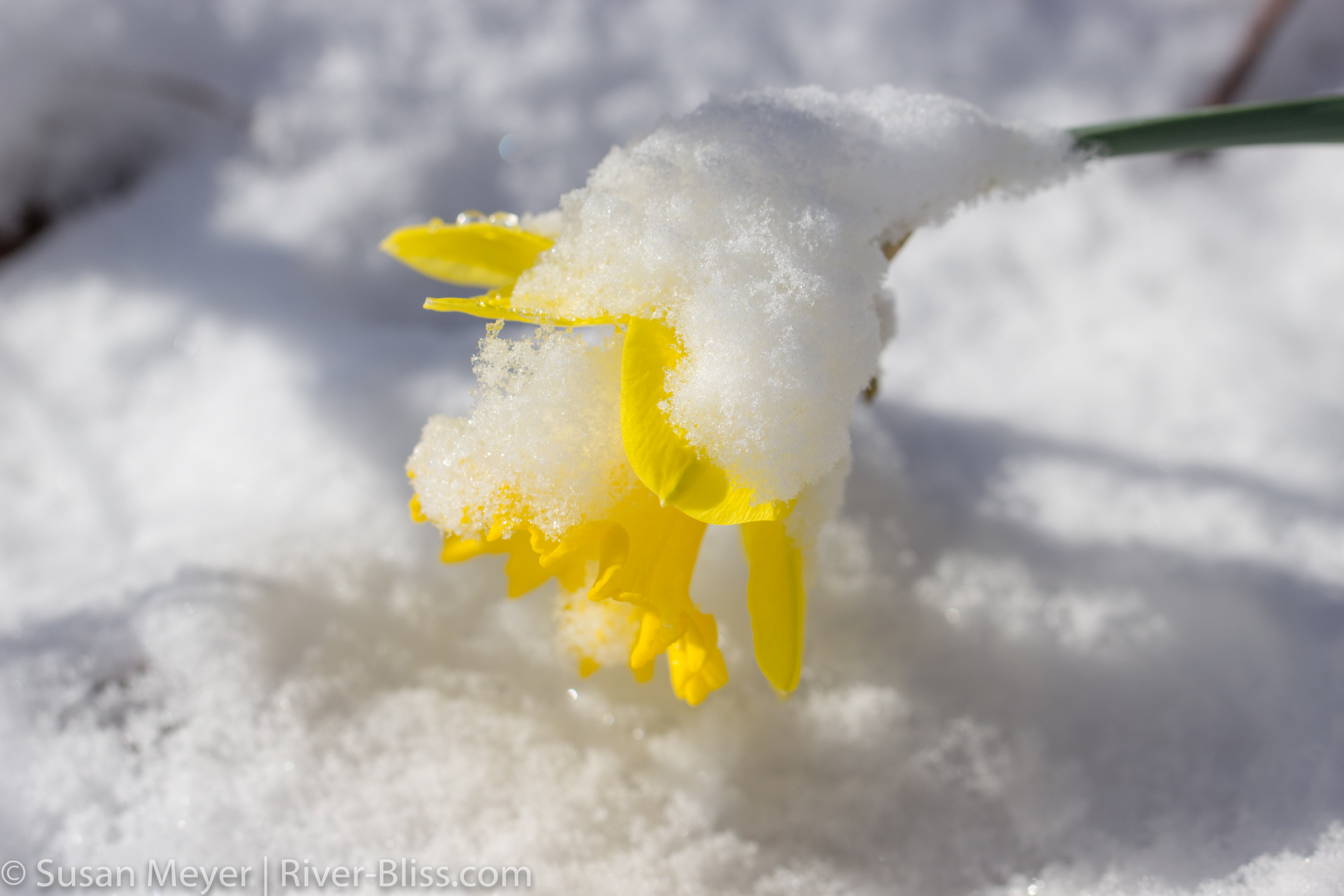 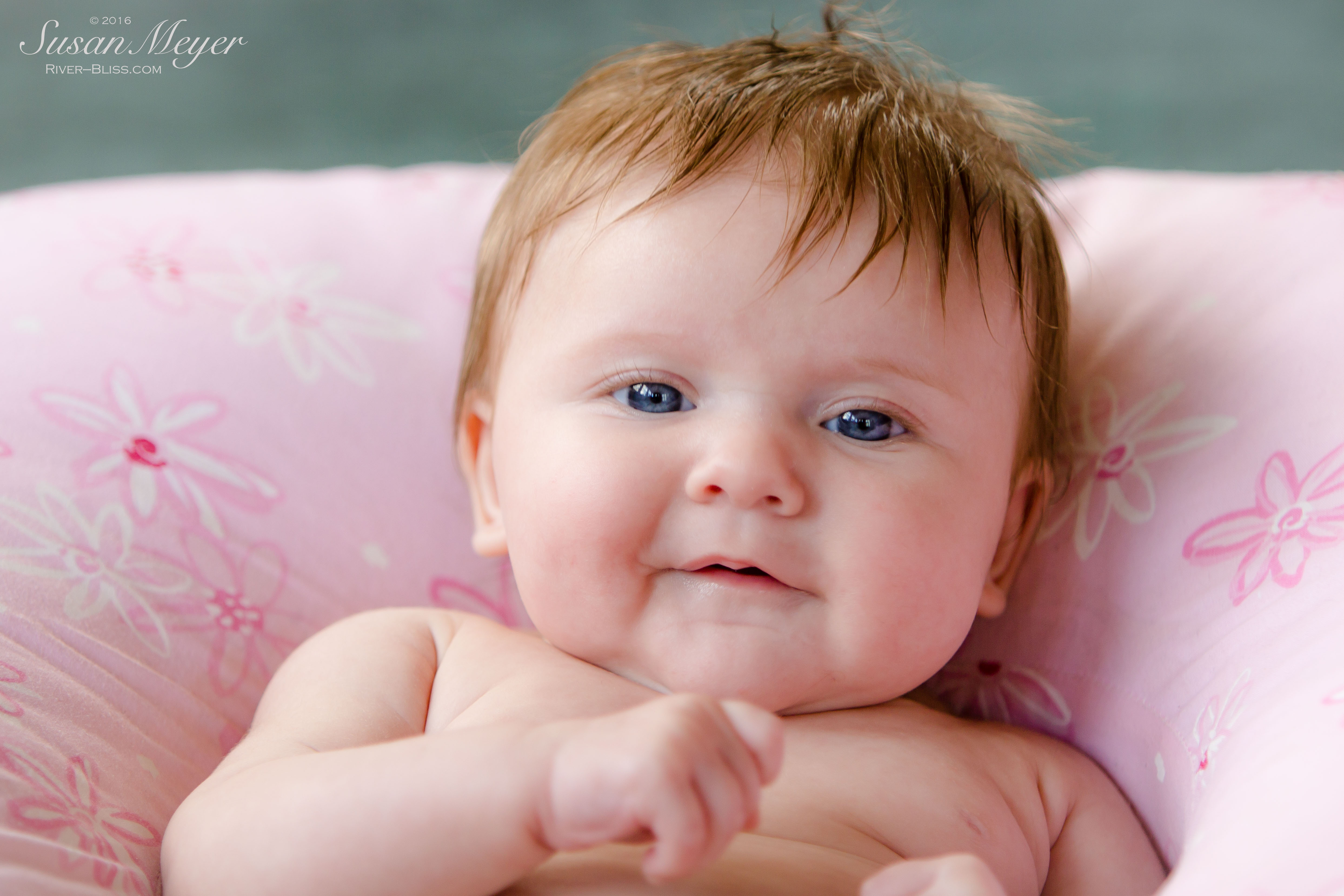 Don’t become disheartened. You never know who will cross your path and what conversation might change your course. Be receptive to all the assistance that is available to you and discerning about what kind you are willing to accept. Be wise. But don’t wait for someone to come along and rescue you. Show up. Do what you can, without overdoing. Put all your energy into blooming. Have faith that the Universe will help you do it. Even when there’s more snow in the forecast, realize it won’t last. The sun grows stronger every day.